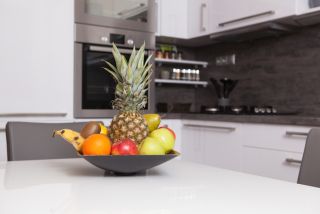 If you want to maintain a normal weight, you might try leaving a bowl of fruit on your kitchen counter, a new study suggests.

Researchers found that people in the study who left fruit on their countertops weighed an average of 13 lbs. (6 kg) less than those who didn't have this healthy snacking option within arm's reach.

But before you start filling up your fruit bowl, you might want to put away the cereal. Study participants who left cereal on the counter weighed an average of 20 lbs. (9 kg) more than participants who didn't keep cereal lying around in plain sight, the researchers found. And those who left soda sitting out were even worse off — they weighed about 25 lbs. (11 kg) more than people who didn't leave these drinks on the counter. [7 Diet Tricks That Really Work]

The study showed that "there was a huge correlation between what was sitting out and how much [participants] weighed," said the study's lead author Brian Wansink, a food psychologist and director of the Food and Brand Lab at Cornell University.

The new study and other recent research reinforce what you probably already know to be true — eating fruits and vegetables is healthy; scarfing down junk food is not. But the new study also sheds some light on how a person's "eating environment" can affect his or her eating habits in surprising ways, Wansink told Live Science.

For the study, Wansink and his colleagues conducted an online survey of nearly 500 women in the United States. The researchers decided to focus on women who were mothers of at least two children because, as they explained in the study, this is the demographic most at risk for weight gain, and previous studies have shown that in U.S. households with both a woman and a man, women are more likely than men to perform chores in the kitchen (like cooking and cleaning up after meals).

The women were asked to take a look around their kitchens and report which, if any, of the following food items and appliances were sitting on the counters — cookies, candy, packaged food (chips, crackers, pretzels and cold cereal), a fruit bowl, a toaster, and a blender or food processer. Then they were asked to report their weight and height (which the researchers used to calculate their body mass indexes, or BMIs) and the weight and height of their spouses, when applicable.

Of all the items on the researchers' list, only the fruit bowl was associated with lower BMIs for both men and women. A few items had negligible associations with the BMIs of the people in the household, but many of the things on the list were associated with higher BMIs.

Even toasters were associated with higher BMIs (though only for men).

In fact, the general correlation between having stuff out on the counters and higher BMIs was so great that the researchers decided to expand their research — they conducted a separate experiment in which they went into the homes of 300 different study participants in Syracuse, New York, to see what was sitting on people's kitchen counters. [13 Kitchen Changes That Can Help You Lose Weight]

"With candy, you have a warning. If I see candy sitting out in my kitchen, it flashes a warning because I know it's bad," Wansink said. But that doesn't happen when he looks at a box of cereal. "Cereal doesn’t send that same signal. It has a halo."

That "health halo," as researchers sometimes call it, hovers over foods like cereal, which are often marketed as being healthy, but can be packed full of sugar and other ingredients that contribute to weight gain if they're not consumed in moderation, Wansink said. The new studies suggest that putting away such foods can help you avoid the temptation to eat them.

"If you want to be skinny, you do what skinny people do. If skinny people don't have pop, cereal and chips sitting on the counter, maybe you shouldn't have it, either. Why try to roll the dice uphill?" Wansink said.

Of course, simply hiding your junk food isn't going to solve all of your weight-related problems, said Wansink, who noted that a healthy diet starts with buying healthy food and leaving junk food at the grocery store.

But putting your foods away, in cupboards or opaque containers can help, Wansink said.

"We keep our cereal in a big, opaque Tupperware container," he said. "It looks like dog food."

Wansink is the author of the book "Slim By Design: Mindless Eating Solutions for Everyday Life" (William Morrow, 2014). The new studies were published Oct. 19 in the journal Health Education & Behavior.