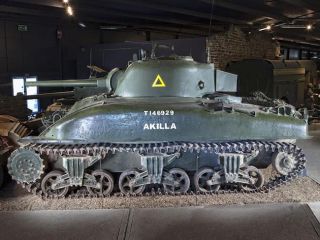 A Canadian variant of the M4 Sherman tank, which was recently sold at auction.
(Image: © Photos courtesy of Bidsquare)

A World War-II era tank was recently sold at auction to a private bidder for $155,000.

The tank, officially called a Medium Tank, M4, is more often known as the M4 Sherman (named after  William Tecumseh Sherman, an American Civil War general). Sherman tanks were the most commonly used tank by United States troops, as well as certain other Allied troops, during WWII.

But the variant of the tank sold in the recent auction wasn't just any Sherman M4; it was the very first Sherman tank produced by Montreal Locomotive Works for the Canadian army. Known in Canada as Grizzly I cruisers, only 188 of these slightly modified M4 tanks were produced in Canada between 1943 and 1944. [7 Technologies That Transformed Warfare]

Like its American counterpart, the Canadian Grizzly has a vertical volute spring suspension system (an advancement that made the Sherman tank more reliable and more comfortable to ride in than earlier tanks). Atop the main body of the tank is a rotating turret that holds a 75 mm gun. Both the Canadian and American versions boast a 9-cylinder, 350-horsepower radial engine, with each tank typically carrying five crewmembers.

But unlike American-made Sherman tanks, the Grizzly has thick armor that gives it a rounded appearance. Later models of the Grizzly also had Canadian Dry Pin (CDP) tracks. These were lighter tracks than their American counterpart was equipped with and lacked any rubber parts, which made them more practical during WWII, when Asian-produced rubber was a scarce commodity.

The recent sale of the Canadian tank took place online via the New York-based auction platform Bidsquare. The tank was sold Wednesday (Oct. 14) by H&H Classics, an auction house that specializes in the sale of cars and motorcycles. Other Sherman tanks have been auctioned off in the U.S. in recent years. In 2014, several different variants of the Sherman tank were sold at auction. The largest of these, an M4A3E2 "Jumbo" Sherman assault tank, sold for more than $1 million.

The Grizzly, which sold for much less than the oversized assault tank, needs a bit of work to its electrical system and hydraulic cables to get it up and running, according to Bidsquare. In other words, a Canadian army tank could soon be rolling toward a town near you.