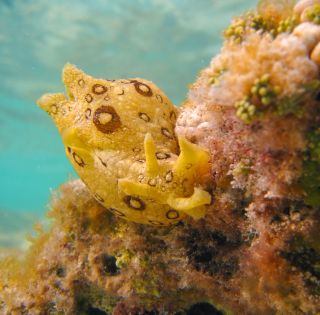 Sea hares are some of the animal kingdom's most well known simultaneous hermaphrodites — those in which adults have both male and female reproductive organs at the same time. But does this unusual biology result in some equally unusual mating behaviors?

So-named for the two rabbit-earlike chemosensory appendages on their heads, sea hares are a type of sea slug in the taxonomic group Aplysiomorpha. A number of sea hare species exist across the globe, the most well studied being the California sea hare, Aplysia californica.

Like other sea hares, this species typically only lives for a year. It seems to mainly mate in the summer, according to Colorado State University biologist Lisa Angeloni, who has studied the species' mating behaviors.

"From what we think we know, most of these [hermaphroditic] sea slugs don't use their own sperm to fertilize their eggs," Angeloni told Live Science. "They have to mate to reproduce." [Photos: Bizarre Sex Lives of Hermaphrodite Sea Slugs]

Lucky for them, mating partners aren't difficult to come by. Young sea hares in their free-floating planktonic stage tend to settle down in groups to grow into adults, though it's unclear if the larval sea hares are attracted to the chemical cues of algae or to each other.

Loner sea hares do occasionally pop up, but for the most part the sea hares tend to aggregate, Angeloni said.

Once they mature, adult sea hares choose their mates.

In animals with separate sexes, males typically develop sex-related traits to attract females, which are most often the choosier sex. But sexual selection is more complicated in hermaphroditic species.

But experts do believe that some kind of mate choice occurs in sea hares, Angeloni said, adding that body size likely plays a role — that is, sea hares acting as "males" (the sperm donors) appear to be interested in finding sperm recipients that have a large body, an indication of being able to produce a larger clutch of eggs.

Interestingly, research suggests that sea hares may invest more time and energy in the female reproductive role as they get older and bigger, Angeloni said.

As hermaphrodites, all sea hares have a penis and a vagina, but the position of these reproductive parts differs between species. In A. californica, the penis is located close to the head on the right side of the body, while the vagina is hidden between the parapodia, or large flaps of skin on the back.

To mate, the sea hare in the male role will insert his penis in the vaginal opening of the sea hare in the female role. In species that have their penis and vagina close to one another, a mating pair may simultaneously inseminate each other. This act is more difficult for A. californica — requiring the initial sperm recipient to twist its body around — but it does happen in rare occasions, Angeloni said.

"Out of a hundred mating events I saw, there was only one instance with five individuals," Angeloni said. "But I wouldn't be surprised if [the mating chain] could be larger."

Mating can last for hours, though it's unclear how long it really takes to transfer sperm. It may be the case that the sperm donor simply holds onto the sperm recipient as a form of mate guarding to prevent other sea hare adults from becoming fathers.

Mating complete, the sea hare may then go on to find other adults to mate with, possibly in a different sexual role. And whatever sperm it collects can be stored for months, to be used when needed, Angeloni said.