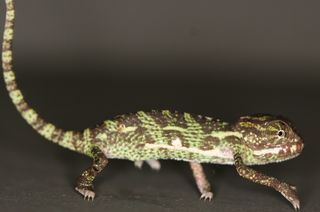 The veiled chameleon (Chamaeleo calyptratus) has a prehensile tail and eyes on either side of its face that move independently of each other. It also sports a projectile tongue for snagging unsuspecting insects.
(Image: © Diaz and Trainor, BMC Evolutionary Biology 2015)

Chameleons may be known for their impressive color-changing abilities, but these curious creatures are also expert tree climbers. Now, new research suggests that chameleons can scale trees because they have twice as many bones in their wrists and ankles when they are developing as scientists had previously thought.

Many chameleon species are very well suited to climbing trees because of their unusual "two-toed" hands and feet, which are actually bundles of fingers and toes bound together, much like duck feet and bat wings. This arrangement helps these chameleons grip branches, instead of having to rely on claws and sticky patches of skin like other lizards do.

To learn more about how these unique features evolved, scientists analyzed embryos of the veiled chameleon (Chamaeleo calyptratus), a common pet reptile. Veiled-chameleon embryos take about 200 days to develop — much longer than the 60 or so days it takes other chameleon species. This slow rate of embryonic growth helped the researchers gain detailed insight into the development of the veiled chameleon's hands, feet and limbs. They compared their results with embryo development in eight other chameleon species and two nonchameleon lizards. [See Photos of Veiled Chameleons Changing Colors]

A chameleon's climbing ability depends on its wrist and ankle bones forming ball-and-socket joints. This joint allows greater rotation of the wrists and ankles, which makes for more agile climbing.

The scientists found that the larger tree-climbing chameleons that evolved more recently had up to twice as many wrist and ankle bones during their embryonic stage as smaller chameleon species that evolved less recently and that generally live in grasses and bushes.

"The chameleon's split hand and foot is not the same across all chameleons," Diaz said.

Future research will test climbing ability across a range of chameleon species to explore the links between the skeleton and locomotion, Diaz said. The researchers will also take a closer look at genes involved in the development of wrist and ankle bones, as well as the tissue between the fingers and toes.

Diaz and his colleague Paul Trainor, of the University of Kansas Medical Center, detailed their findings online Sept. 18 in the journal BMC Evolutionary Biology.