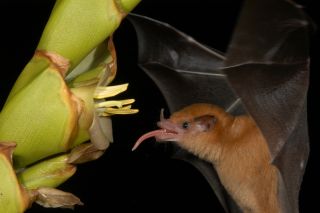 The nectar-feeding bat Lonchophylla robusta, which has a grooved tongue, visits a bromeliad flower.
(Image: © M. Tschapka/University of Ulm)

Many insects rely on flower nectar as their main source of food, and have specialized mouthparts to siphon the sweet liquid. A few vertebrates — including birds such as hummingbirds, and mammals such as the honey possum — also have specialized nectar-feeding mouthparts.

Bats make up the largest group of specialized nectar-feeding mammals. These flying beasts often have tongues that are longer than their bodies. However, while most of these species have hairy tongues, some have nearly hairless tongues covered with grooves that stretch from left to right. Until recently, scientists did not know how these differences influence how the bats slurp up nectar.

To learn more about these bat tongues, scientists used high-speed cameras to watch bats trained to drink nectar from glass tubes containing honey water in the lab. They experimented with Pallas' long-tongued bat (Glossophaga soricina), which has a bristly tongue, and the orange nectar-feeding bat Lonchophylla robusta, which has a grooved tongue. [Video: Watch Bat Tongues Slurp up Nectar]

All of the bats visited the artificial flowers with hovering flights that rarely lasted longer than a second. The hairy-tongued bats moved their tongues in short, repeated movements resembling the lapping of a cat. In contrast, the groove-tongued bats stuck their tongues into the glass tubes and never separated them from the nectar during their entire visit.

"The main challenge of our work is that we are dealing with animals and not machines — you sometimes work with bats that react very quickly and everything goes as expected, but other bats make you wait for hours before they cooperate," study co-author Tania Gonzalez-Terrazas, a behavioral ecologist at the University of Ulm in Germany, told Live Science.

The grooved-tongued bats could not suck up their nectar using their tongues like straws because the tongues did not roll up to form a tightly sealed tube. Instead, the researchers saw movements along the edges of the grooves resembling the kind of rippling, contracting motions that bowels use to move excrement out of the body or that the throat uses to move food into the stomach. This kind of tongue motion had never been seen before in mammals.

The scientists suspect these bats may also rely on capillary action — an effect in which liquid flows through narrow pipes, even working against gravity — to pull the nectar up their tongues. Capillary action helps draw water up trees.

Both kinds of bat tongues were effective at getting nectar. In fact, these bats need nectar to survive. "They need to consume nectar in large quantities each night, up to the 1.5-fold of their own body weight, and have to make approximately 800 flower visits per night," Knörnschild told Live Science.

Future research could uncover whether one kind of bat tongue has an advantage over the other for different kinds of flowers. Grooved tongues might be good at drinking concentrated pools of nectar in flowers, while hairy tongues might be good at mopping up nectar spread widely on a flower's surface, the researchers said. Some flowers may accommodate both kinds of tongues, Knörnschild suggested.

The scientists detailed their findings online today (Sept. 25) in the journal Science Advances.