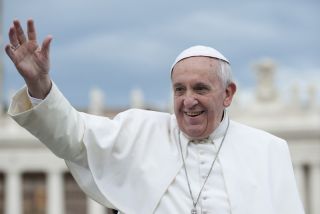 Pope Francis has a full itinerary for his U.S. trip, but what exactly will he say during his time in the United States?

Based on his past homilies, encyclicals (letters on Catholic doctrine) and actions, it's likely his messages will focus on the common good — the shared responsibility of ensuring each person has what he or she needs to survive, Catholic scholars said. But Pope Francis may also talk about an array of controversial subjects, including poverty, immigration, human-caused climate change and the perils of extreme consumerism, experts said. Whether his messages will resonate with audiences or make a change to politics as usual, however, remains to be seen.

The trip, from Sept. 22 to 27, will be the first time Pope Francis has set foot in the United States, and only his 10th trip outside of Italy since becoming pope in March 2013, said Daniel Cosacchi, a doctoral student of Christian ethics at Loyola University in Chicago. [Papal Primer: History's 10 Most Intriguing Popes]

The pope will likely give two kinds of addresses, Cosacchi said. One type will be aimed at the public: He's leading a number of services in Washington, D.C., New York City and Philadelphia, according to the official schedule. The other type will target officials, as Francis is also meeting with President Obama and is going to the United Nations. He will also be the first pope in history to address the U.S. Congress, courtesy of an invite from House Speaker John Boehner.

In Philadelphia, Pope Francis is visiting a correctional facility, suggesting that he'll talk about reforming the prison system in the United States, Cosacchi said.

These visits echo the pope's humility and his past focus on people traditionally overlooked by the church, including non-Catholics and inmates.

"At the beginning of his papacy, instead of blessing the people as his first act, as previous popes have done, he actually bowed down and asked for the people to pray for him and for the success of his ministry," said J. Patrick Hornbeck II, chair of the department of theology at Fordham University in New York.

In June the pope released an encyclical that addressed climate change, calling it largely human-caused and calling for people to care for Earth, "our common home." It's likely that Pope Francis will talk about the encyclical, emphasizing the importance of caring for the environment, Cosacchi said.

In some ways, the pope may be critical. He may urge listeners to rethink their consumerist lifestyles.

"While he's not condemned capitalism per se, he has pointed to many of the challenges that unregulated capitalism can create," Hornbeck said. "He's talked about his concern that a sort of inhuman capitalism can forget that people are people, and begin to treat people simply as goods to be bought or sold or moved around at will." [Infographic: The World's Catholic Population]

The pope's other speeches — those given to other bishops, U.S. politicians and at the United Nations — will likely urge his audience to take action to help the common good and protect the environment, the experts said.

In Washington, D.C., Pope Francis is scheduled to meet with the United States Conference of Catholic Bishops, a group that is developing U.S. Catholic churches' priorities for 2017 to 2020. Those priorities include evangelization and religious freedom (with a focus on whether insurance can mandate that Catholic institutions provide contraception to their employees). But Pope Francis may encourage the bishops to look at other priorities, including helping Christians who are being persecuted for their religious beliefs in Syria and Iraq, Cosacchi said.

The pope may also ask politicians to work on solutions for the common good, instead of short-term fixes that please constituents and get politicians reelected, Cosacchi said.

"In his encyclical, he said that politicians have to have the courage to fight for long-term solutions, even if it doesn’t seem that popular," Cosacchi said.

Making change can be challenging. For instance, heeding the pope's call to change consumerism and poverty is no easy task, he said.

"Answering these problems really touches the way we live, and that is harder for lots of people to accept," Cosacchi said.

But Pope Francis practices what he preaches: "He is a man who possesses very little. He doesn't watch TV, use the Internet (although he does approve the tweets that go out in his name) or even follow some of the news events in the world very closely," Cosacchi said. "I think we can all agree that this type of lifestyle is at odds with the average American's lifestyle. [It's] very hard to change that, but I am also hopeful that we can all begin to do little things to turn the tide on our consumerist mentality."

It's anyone's guess how politicians will heed the pope's recommendations. But the pope has already proved to be instrumental in helping to thaw relations between the United States and Cuba, and he may influence future political actions.

"All politicians, regardless of their religion (if any), or their political party, have the responsibility to carry out the common good in society," Cosacchi said. "This especially means [to] care for the poor and the disenfranchised. Francis will be strong on these points."

It's unclear whether the pope will discuss same-sex marriage and abortion (the church opposes both), but these issues may surface at the World Meeting of Families in Philadelphia, Cosacchi said. At the meeting, he's expected to encourage young couples to get married and create a community in the church, Cosacchi said. The pope may also recommend that divorced people have a place in the Catholic Church, he said. (Currently, Catholics who are divorced and remarried are considered to be in a state of mortal sin and cannot take communion.)

"Pope Francis wants to be as welcoming as possible," Cosacchi said. "I think what you're going to hear is a lot of encouraging things."

"But what he lacks in English-language speaking ability he makes up for in charm," Cosacchi said. "Just being in his presence, he really makes you feel at home and at ease. That is a gift."