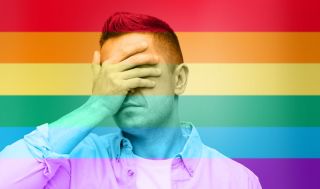 Homophobic attitudes may say a lot about the person who holds them, new research suggests.

A new study of university students in Italy revealed that people who have strongly negative views of gay people also have higher levels of psychoticism and inappropriate coping mechanisms than those who are accepting of homosexuality.

This doesn't mean that homophobic people are psychotic; rather, psychoticism is a personality trait marked by hostility, anger and aggression toward others. But the study does suggest that people who cling to homophobic views have some psychological issues, said lead researcher Emmanuele Jannini, an endocrinologist and medical sexologist at the University of Rome Tor Vergata.

"The study is opening a new research avenue, where the real disease to study is homophobia," Jannini told Live Science. [7 Thoughts That Are Bad for You]

The psychology of homophobia

Earlier research has found homophobia to be a complex subject, with some studies suggesting that people with visceral negative reactions to gays and lesbians often harbor same-sex desires themselves. Other studies, though, contest that idea, and suggest that homophobic people are truly averse to same-sex attraction. Other factors — such as religiosity, sensitivity to disgust, hypermasculinity and misogyny — seem to play a role in anti-gay beliefs, Jannini and his colleagues wrote in an article published Sept. 8 in The Journal of Sexual Medicine.

But no one had ever looked at the mental health or psychopathology of homophobic people. In the new study, the researchers asked 551 Italian university students, ranging in age from 18 to 30, to fill out questionnaires on their levels of homophobia as well as their psychopathology, including levels of depression, anxiety and psychoticism. The homophobia scale required participants to rate how strongly they agreed or disagreed (on a 5-point scale) with 25 statements, such as: Gay people make me nervous; I think homosexual people should not work with children; I tease and make jokes about gay people; and It does not matter to me whether my friends are gay or straight.

The students also answered questions about their attachment style, which categorizes how people approach relationships. The "healthy" attachment style is known as secure attachment, in which people feel comfortable getting close to others and having others get close to them. People who are insecurely attached, on the other hand, might avoid intimacy, become too clingy or desire closeness but feel uncomfortable trusting others.

Overall, the better the mental health of the person (based on the responses to the questionnaire), the less likely he or she was to be homophobic, the researchers found. People with "fearful-avoidant" attachment styles, who tend to feel uncomfortable in close relationships with others, were significantly more homophobic than those who were secure with close relationships. The researchers also found that people with higher levels of immature defense mechanisms were more homophobic than those with mature defense mechanisms.

High levels of hostility and anger, measured as psychoticism, were also linked to homophobia, the researchers found.

But other mental health issues had the opposite association: Depression and neurotic defense mechanisms (like hypochondria or repression) were both linked with lower levels of homophobia.

The findings position homophobia as a trait more often seen in dysfunctional personalities, but personality isn't the whole story. Homophobia is a "culture-induced disease," Jannini said, so personality traits probably interplay with factors like religion and conservative values. The researchers are currently expanding the study to students in Albania, Jannini said. They're also studying how the fear of not being "man enough" might influence homophobic attitudes.