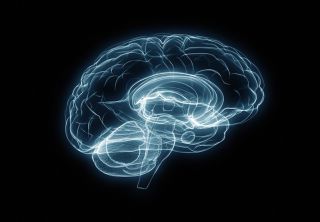 A wirelessly powered implant the size of a grain of rice can electrically stimulate the brains of mice as the rodents do what they please. The new gadget could help scientists better understand and treat mental health disorders such as depression, according to a new study.

The human brain is the most powerful computer known, an extraordinary assembly of living electrical circuits. To gain greater understanding of how the human brain works — and how to fix any problems with it — neuroscientists would like to electrically stimulate the brains of simpler animals as they scurry around, carry out tasks and respond to their surroundings.

Tiny, untethered brain-stimulating devices would permit animals to move, behave and react freely during experiments. However, batteries are too heavy and bulky to fit into such small gizmos. Instead, these inventions could be wirelessly powered using magnetic induction, wherein one coil of wire can transmit energy to another coil using magnetic fields. [Top 10 Mysteries of the Mind]

"Wireless neural stimulation in mice has been demonstrated many times before, and in many of these systems, the mice could freely move over a large area," said study senior author Ada Poon, an electrical engineer at Stanford University in California.

However, previous wireless brain-stimulating devices were limited by their power-harvesting components. If these parts were small, power was lost if the animals moved away from the spot where the energy was focused, which limited how far the animals could roam. On the other hand, if these parts were large, they were typically too big to be implanted.

Other labs either used bulky devices mounted on the skulls of mice, or used complex arrays of coils paired with sensors to locate the mice and deliver power. "To us that sounded like a lot of work," Poon told Live Science. "We were 'lazy.' The 'laziness' led us to be more creative."

"Surprisingly, it works," Poon said. "Engineers tend to think of complex solutions, but sometimes if we back off a bit and think out of the box, we might be able to come up with some crazy but workable solutions that are simpler."

The roughly cylindrical device is about 2 millimeters wide, 3 mm long, and 20 mm in weight, making it about 100 times smaller and lighter than previous devices. "We like to compare the size with a grain of rice of the slightly thicker sort," Poon said.

The bodies of the mice are not used to absorb energy, the researchers said. Rather, the mouse bodies interact with surrounding magnetic fields, helping focus energy like a lens from the transmitter to the receiver in the implant.

About one-thousandth of the energy transmitted at the mice gets absorbed by the devices, an efficiency comparable to previous systems, the researchers said. "We achieve these efficiencies, however, without limiting the area of coverage or requiring large head-mounted antennae," Poon added.

The scientists could power the implant as the mice roamed across a 6.3-inch-wide (16 centimeters) chamber lined with a magnetic lattice. The device was implanted in a region of the mouse brain known the infralimbic cortex, which is implicated in animal models of depression and anxiety.

"This will open the door to a range of new experiments to better understand and treat mental health disorders such as depression," Poon said. "In addition, since there is no wire and no protruding structure coming out of the animals, it will allow experiments with multiple animals in the same space to better understand social interaction — in the treatment of chronic pain and mental disorders, for example."

The scientists detailed their findings online Aug. 4 in the journal Physical Review Applied.