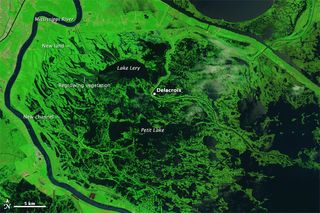 Aerial false-color image of the marshes and swamps that buffer New Orleans from the Gulf of Mexico 10 years after Hurricane Katrina. Image captured by the Operational Land Imager on Landsat 8 on Aug. 2, 2015.
(Image: © Jesse Allen)

Hurricane Katrina, which made landfall along the Louisiana-Mississippi border as a Category 3 storm on Aug. 29, 2005, transformed the marshes that buffer New Orleans from the Gulf of Mexico by ripping apart and moving mats of dead grass. The storm stirred up and distributed soft underlying sediments, digging several new channels and depositing sediment and debris in new places, according to NASA.

The photos highlight how the region has transformed since the devastating hurricane. In the satellite images, normal vegetation looks bright green, flood-damaged vegetation is brown and water appears dark blue.

Hurricane Katrina powered a massive surge of water that enlarged lakes, including Lake Lery and Petit Lake, to the north and south of the fishing town of Delacroix, respectively. The wetlands surrounding Delacroix were among the hardest hit by Katrina, according to NASA.

The storm gouged out new channels and widened canals, taking over areas that previously hosted marshland. Although flood-damaged vegetation has rebounded in the decade since the hurricane, the marshlands have not, according to NASA.

To get a detailed look at how the land changed around Delacroix, scientists at the United States Geological Survey compared pixels on a series of images of the area taken by Landsat and other commercial satellites over time. They measured how much Hurricane Katrina impacted the area compared with Hurricane Gustav in August 2008.

The scientists found that Katrina’s 20-hour-long winds and storm surges that reached up to 16.4 feet (5 meters) left a lasting imprint on Delacroix’s marches — changes that were then reinforced by Hurricane Gustav three years later.

On the flip side, Katrina created new ponds and channels that resulted in a change of 3.3 percent of the image's pixels from water to land.