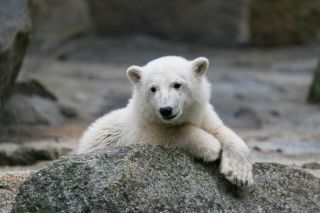 He spawned millions of fuzzy toys, garnered media attention on everything from his cod-liver diet to his lack of mates and even inspired his own song before his untimely death in 2011.

He was Knut the polar bear, the star of the Berlin Zoo.

It turns out that Knut was killed by an autoimmune disorder called anti-NMDA receptor encephalitis, a kind of brain inflammation. Past work implicated encephalitis in his death, but hinted that a virus or bacteria was to blame.

The new discovery suggests that a disease previously identified only in humans could be a leading cause of encephalitis deaths in other animals, study co-author Alex Greenwood, a veterinary physiologist at the Leibniz Institute for Zoo and Wildlife Research in Berlin, said in a press briefing. [See Images of the Adorable Polar Bear Knut]

A life full of drama

The twists and turns of Knut's life captured the popular imagination. His mother Tosca rejected him at birth (Dec. 5, 2006), and his brother, who was born the same day, died just four days later. So the zookeeper Thomas Dörflein bottle-fed Knut, forming a deep bond with the cub. Videos of Dörflein swimming and snuggling with Knut were Internet sensations.

"You had this immediate charismatic contact between human and animal," Greenwood said.

When Dörflein died suddenly of a heart attack in 2008, it was as if Knut was orphaned again. And Knut had a difficult time as a grown bear. He was rejected by potential mates and constantly fought with other polar bears and was separated from them.

Even his death was spectacular. On March 19, 2011, Knut had a seizure and collapsed, falling backward into his pool, dying in front of hundreds of zoo visitors.

A tissue sample taken from Knut shortly after his death revealed he had encephalitis, with a 2014 study hinting at an infectious virus as the cause. But a closer analysis revealed antibodies, or immune cells, to the influenza virus, but no actual flu virus particles present. None of the inflammation seemed tied to an active infection, the researchers said.

"We basically had ruled out any pathogen imaginable with a very comprehensive search using all the most modern methods and next-generation sequencing and all the classic methods of serology, and we just didn't find anything," Greenwood said. (Serology refers to the study of body fluids, often the identification of antibodies in blood serum.)

But when Harald Prüss, a neurologist at the German Center for Neurodegenerative Disorders (DZNE) Berlin and Charité, read the report on Knut's death, he thought the case sounded a lot like the human disease he treats in his clinic, known as anti-NMDA receptor encephalitis. [Top 10 Mysterious Diseases]

The rare disease occurs when antibodies, the immune cells designed to recognize foreign agents, bind to glutamate (NMDA) receptors in the brain, causing them to malfunction. Anti-NMDA receptor encephalitis affects about one in 200,000 people, and initially causes fever, headaches and psychosis before progressing to motor problems, seizures and death if undiagnosed and untreated. It is the major cause of encephalitis in humans when no virus or bacteria can be blamed, yet it was only discovered in 2007.

Luckily, the disease can be mostly reversed if caught early enough, Prüss said in the briefing.

"We usually try with high-dose steroids during the first days, and then in some patients, plasma exchange — plasmaphoresis — is quite efficient in removing these antibodies," Prüss said.

The team analyzed Knut's brain and found signs of NMDA antibodies at his glutamate receptors, the researchers report today (Aug. 27) in the journal Scientific Reports. It's not clear exactly why his body began to attack his brain, but in humans, a recent case of influenza or herpes can sometimes trigger the body's friendly fire, Prüss said.

The new results raise the possibility that anti-NMDA receptor encephalitis is relatively common across the animal kingdom. So theoretically, zoo animals and even some endangered species in the wild could potentially get treatment, Greenwood said.

Of course, animals can't talk, so veterinarians only suspect encephalitis when they start to have seizures or motor problems. Veterinarians would likely give sick zoo animals a cocktail of antivirals, antibiotics and immune-suppressing drugs as soon as they show those symptoms, to try to eliminate the antibodies, Greenwood said.