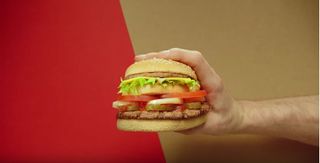 An image of the "McWhopper," a proposed burger that would combine Burger King's Whopper with McDonald's Big Mac.
(Image: © YouTube Screengrab/Burger King)

Burger King is proposing a one-day truce with its fast-food competitor McDonald's to create the "McWhopper," a combination of the Big Mac and the Whopper, the most popular burgers at the respective chains. But just how many calories would this giant assemblage of beef and toppings have?

Neither restaurant has released information about the exact nutritional value of the hypothetical mega-burger, which Burger King wants to sell in honor of World Peace Day in September. However, it's possible to come up with a ballpark estimate using information from the fast-food chains' websites.

According to the Burger King proposal, the McWhopper would be 6 parts Big Mac and 6 parts Whopper. That is, the sandwich's top half would include the Big Mac's top bun, beef patty, cheese, lettuce, special sauce and middle bun, while the bottom half would consist of the Whopper's tomato, onion, ketchup, pickles, beef patty and bottom bun.

To start our McWhopper calculation, let's first look at how many calories are in each burger separately: The Big Mac has 540 calories, and the Whopper has 650 calories.

For a simple estimate of the McWhopper calories, we would divide the calories in the Big Mac and Whopper each by two, and add them together, giving us 595 calories. However, this underestimates the calories in the McWhopper, because the mega-burger contains two of the three buns found in a normal Big Mac, so it actually has more than half of that burger's usual calories. [9 Snack Foods: Healthy or Not?]

Combine the two parts, and we get 726 calories for the two burgers together, or about one-third of a person's total recommended daily calories.

Using a similar method, we can also figure out the amount of fat in the McWhopper: The Big Mac part contains 16.5 grams of fat, and the Whopper part contains 19.5 grams, for a total of 36 grams of fat, or about 54 percent of what's considered the maximum amount a person should eat in a day.

It remains unclear if the McWhopper will come to fruition. McDonald's CEO Steve Easterbrook responded to Burger King's proposal by saying he would be "in touch" with the fast-food rival. "We love the intention but think our two brands could do something bigger to make a difference," Easterbrook said on Facebook.