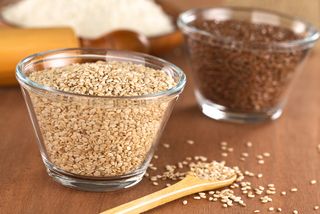 Eating a plant-based diet is known to be good for your waistline, but now a new study has zeroed in on specific plant compounds — found in foods such as flax and sesame seeds — that may help prevent or slow weight gain.

The study found that women who consumed high levels of these compounds, called lignans, tended to weigh less and gain less weight over time, compared with women who didn't consume these compounds in high amounts.

The findings are preliminary, and more studies are needed to confirm the results in larger populations, the researchers said. Still, these findings "support the notion that increased lignan consumption might potentially lead to less weight gain," the researchers, from Harvard School of Public Health, wrote in the Aug. 18 issue of the American Journal of Epidemiology.

Earlier studies in animals have suggested that lignans may play a role in regulating weight. Flax and sesame seeds are rich in lignans, but the compounds are also found in lower amounts in other plant-based foods, including whole grains, nuts, fruits, vegetables, coffee, tea and wine, the researchers said.

In the new study, the researchers analyzed information from about 1,000 women, who gave urine samples at the study's start, and then were followed for about 10 years. The urine samples were analyzed for two compounds, called enterodiol and enterolactone, which are formed when bacteria in people's gut break down lignans in foods.

It's not clear exactly how these lignans may act to prevent weight gain. But these lignans are similar in structure to the hormone estrogen, and may be able to influence body weight by binding to the receptors for estrogen, the researchers said.

The researchers noted that the study assessed lignan levels in urine at one point in time, and future studies should examine levels more than once. In addition, because the study involved women who were mainly of European ancestry, future studies are needed to see if the results apply to men and people of other ethnicities, the researchers said.