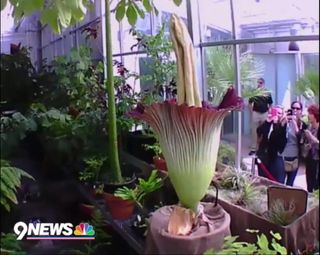 DENVER – The first-ever bloom of a stinky "corpse flower" in the Rocky Mountain region is happening here today (Aug. 19).

The corpse flower, or titan arum, is famous for its rare-but-enormous blossoms. Blooms usually stand about 8 feet (2.4 meters) tall. They burst open on an unpredictable cycle that can stretch for more than a decade between flowers. The plant's scientific name, Amorphophallus titanum, means "giant, misshapen penis," hinting at the appearance of this bizarre plant.

But what really makes corpse flowers famous is their stench. The plants smell like rotting flesh, all the better to attract the carrion beetles and flies that carry the flowers' pollen. Each bloom lasts only about 48 hours, after which the plant goes dormant and may not bloom again for another seven to 10 years. [Watch live broadcast of the blooming corpse flower]

When titan arum plants aren't blooming, they produce a single, enormous leaf that can grow 20 feet (6 m) high, according to The Ohio State University's Biological Sciences Greenhouse. The plant goes through several cycles of sprouting a leaf, then going dormant before its first bloom. This often takes up to a decade. After a bloom, the plant goes dormant again for several months before growing another leaf.

The plant blooming now at the Denver Botanic Gardens is the first corpse flower to bloom in the state, and in the Rocky Mountain region in general. In July, another corpse flower bloomed at the UC Botanical Garden in Berkeley, drawing huge crowds.

The Denver Botanic Gardens is hosting a live stream of the blooming flower, which measures more than 5 feet (1.5 m) tall. Garden hours have been extended from 9 a.m. to midnight today (Aug. 19) and from 6 a.m. to midnight on Thursday (Aug. 20) to accommodate visitors who want to see — and smell — the rare blossom.