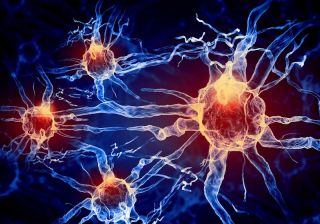 People with amyotrophic lateral sclerosis (ALS) are known to experience changes in their metabolism after their diagnosis — for example, they burn more calories while at rest. But a new study from the Netherlands suggests these changes happen even before patients have symptoms of the disease.

However, it's too soon to know whether these changes represent a cause or an effect of the disease, experts say.

In the study, the researchers surveyed about 670 people with ALS, also known as Lou Gehrig's disease, shortly after their diagnosis. The patients were asked to report the foods they ate in the month before they started to experience symptoms. Their answers were compared with those of about 2,000 other people in the general population who did not develop ALS.

The researchers found that before their symptoms started, the people with ALS had a higher calorie intake — consuming an average of 2,258 calories a day — than those who didn't develop ALS, who consumed an average of 2,119 calories per day. But despite higher calorie consumption, ALS patients had a slightly lower average body mass index (BMI) before their symptoms started, compared with those who didn't develop ALS.

The study also found that the people who developed ALS consumed slightly more fat and cholesterol, and slightly less alcohol, than those who did not develop the disease.

Because the study was conducted at a single point in time, the researchers cannot say whether any of these aspects of people's diets could be causes of ALS or whether they are effects of having the disease.

But the findings lend support to the idea that "altered energy metabolism may already be present in patients with pre-symptomatic ALS," said the researchers, from the University Medical Centre Utrecht. [Top 10 Mysterious Diseases]

Dr. Robert Baloh, director of the ALS Program and Neuromuscular Medicine at Cedars-Sinai Medical Center in Los Angeles, said research like the new study is important because so little is known about how people's diets and other environmental factors might influence their risk of ALS.

However, the patients in the new study were asked about their diet only a month before they showed symptoms, and patients almost certainly already had ALS at this point, Baloh said.

"This change in dietary habits and metabolism could actually just reflect the earliest stages of ALS, rather than before they had ALS," said Baloh, who was not involved in the study.

It would be interesting to know whether these metabolic changes were present many years before a person developed ALS, Baloh told Live Science. But it is difficult to look at this question — because ALS is such a rare disease, researchers would have to follow hundreds of thousands of people for many years just to wind up with a few patients who developed the disease, Baloh said.

Studies in mice and in people have shown that those with ALS experience an increase in the energy they burn while at rest. Higher fat consumption in ALS patients may be the body's way of compensating for this increased energy expenditure so that people don't lose weight and muscle, the researchers said.

However, it's also possible that a high-fat diet may actually cause the increased energy expenditure at rest, they said.

"It remains uncertain whether these findings are part of a disease-causing chain of events in ALS" or whether they happen in people who are already developing the disease, the researchers said. To determine the reason for the link, future studies must follow patients forward in time, they said.

The study also cannot say why a higher alcohol intake was linked with a decreased risk of ALS, but some earlier studies have found that antioxidants in red wine protect against brain cell death. (In patients with ALS, neurons in the brain and spinal cord that control voluntary movement degenerate or die.)

The researchers noted that the participants in their study were asked to think back to the foods they ate during a prior month, which might not be entirely accurate if people misremembered what they ate.

Baloh also noted that people who are diagnosed with ALS may be more vigilant than people in general about the events that happened in the months before their diagnosis, which could bias the results.

The study is published online today (Aug. 17) in the journal JAMA Neurology.