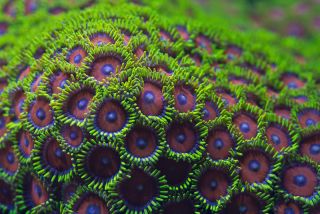 Aquarium enthusiasts and people who work in aquarium stores should be aware that some types of coral produce dangerous toxins that can be hazardous to your health, according to a new report.

The report, from the Centers for Disease Control and Prevention, describes 10 cases of toxin poisoning in Alaska between 2012 and 2014 that were linked to zoanthid corals, a common type of coral in home aquariums. Some zoanthid contain high levels of palytoxin, a toxin that can cause life-threatening symptoms if people touch, inhale or ingest it, the CDC said.

"Many aquarium store employees and marine aquarium hobbyists are not aware of palytoxin as a potentially serious hazard associated with handling some zoanthid corals," the report said. "General recommendations on coral handling and decontamination practices would be helpful for hobbyists, commercial coral growers, and the public health and clinical provider communities." [Images: Colorful Corals of the Deep Barrier Reef]

Public health officials in Alaska began an investigation into toxin poisoning after a man was hospitalized — and two of his housemates experienced serious symptoms — following the introduction of zoanthid corals into their home aquarium. The patients had fever, weakness, cough and muscle pain, and a reported a bitter metallic taste in the mouth. All three patients recovered within two days.

Although none of the patients had direct contact with the coral, they appear to have inhaled the toxin, the researchers said. The toxin could have been released when some of the coral polyps broke off during the transfer of the coral to the aquarium. The corals can also produce aerosolized toxins when people use hot water or scrub to remove zoanthids from tanks, the researchers said.

The store that sold the patients their coral also reported that multiple staff members had experienced similar symptoms in the recent past, including a metallic taste, cough, joint pain, flank pain, fever and feeling cold during the night. One staff member said he or she had experienced symptoms of toxin poisoning nine times.

The shop owner also told health officials that in 2012, a man and his pregnant wife were hospitalized after the husband cleaned a fish tank with zoanthids. Although the wife did not help with the cleaning, she walked by the area several times. The couple were in the intensive care unit for several days. The wife delivered her baby, but the infant was three months premature. The child survived, and did not appear to suffer from adverse health effects, although the husband reported that he still had lung problems two years later, the report said.

The toxin from zoanthids can be neutralized by soaking the coral for 30 minutes in household bleach and water. In addition, contaminated items should be soaked in diluted bleach before disposal, the report said. Activities that could produce aerosols should be undertaken with caution, they said. When decontaminating areas that may have been exposed to the toxin, patients were advised to use protective equipment, including a face mask, goggles and overalls.

The study was published in the Aug. 14 issue of the CDC journal Morbidity and Mortality Weekly Report.