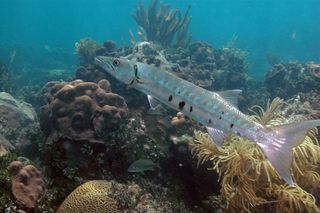 A barracuda swims over a coral reef.
(Image: © Lawrence Cruciana/Shutterstock.com)

An illness called ciguatera poisoning, which is caused by eating certain fish, is more common in Florida than previously believed, a new study finds.

Each year, 56 Floridians become ill with this kind of poisoning for every 1 million people in the state, according to the new estimate from researchers at University of Florida and the state's Department of Health. Previous calculations suggested there were only two cases per 1 million people yearly.

Most infections in the state are caused by eating fish that were caught in either the Bahamas or the Florida Keys, though nearly 5 percent of the toxic fish came from Palm Beach County waters, and 4 percent came from Miami-Dade County. A certain type of algae that grows on coral reefs makes the toxin that causes the illness, and this toxin can accumulate in the bodies of tropical fish.

The researchers also found that Hispanic people are at greater risk of getting ciguatera than other groups.

"That's a new finding in this study," said Elizabeth Radke, lead author of the study and an epidemiologist at University of Florida's Emerging Pathogens Institute. "Hispanics have a cultural preference for eating barracuda, and we believe this is the reason for higher numbers."

In the study, Radke and her co-authors examined Florida's health records, finding 291 cases of ciguatera reported between 2000 and 2011. [7 Perfect Survival Foods]

To find unreported cases, the researchers contacted people who fish recreationally, because these people would be most likely to eat the reef fish that cause the illness, Radke said. The researchers sent a survey to the 311,799 fishing-license holders in the state who had provided an email address on their license application.

Of the 5,352 people who responded, 245 described illnesses the researchers classified as likely cases of ciguatera, while another 74 reports were categorized as possible cases of the illness, according to the findings published today (June 29) in the American Journal of Tropical Medicine and Hygiene.

Though the survey results suggest the true incidence of ciguatera is significantly higher than the previous estimates, which were based solely on department of health records, the researchers did not find that rates of the illness were increasing. They did not find that the illness was occurring over a larger geographic range, either. The researchers had thought this was possible because of warming seawater temperatures, Radke said.

"Florida is on the geographic border," Radke said. The state's waters are warm enough to support the algae that produce the toxin, yet immediately north of Florida, that is no longer the case.  In other words, Florida sits at what is currently the northernmost range of the algae. "If we see this toxin moving north, that would be a bellwether for the rest of the world," she said.

Along with barracuda, contaminated grouper, amberjack and hogfish have also made people sick, the researchers found.

No cooking or smoking method will destroy the poison. The resulting illness causes severe nausea and vomiting. Ciguatera's characteristic symptom is an odd feeling of having hot and cold sensations reversed; people report feeling that something is hot when in fact it is cold, and vice versa, said Mikel Lopez, a poison specialist at Jackson Memorial Hospital's Poison Control Center, who was not involved in the new research.

"I've seen patients who have only complained of itchiness, while another will say, 'I have a metallic taste in my mouth,'" Lopez told Live Science.

Generally, people who get ciguatera start feeling sick two hours to a day after eating a contaminated fish, and they "get over it in a matter of days or weeks," said Andy Reich, a co-author of the paper and bureau chief of the Environmental Health Unit of Florida's Department of Health. Cases of illness lasting longer are extremely rare, Reich said.

Worldwide, an estimated 50,000 to 500,000 cases occur each year. Ciguatera is endemic in the South Pacific and the Caribbean, where waters are warm enough for the algae that produce the toxin to thrive. In the United States, the states with the most cases are Hawaii and Florida.

"We believe ciguatera has increased over the last 30 years, but the role of climate change is uncertain," said Richard Lewis, a professor of pharmacology at University of Queensland, Australia, who specializes in of marine toxins.

It's possible that the warming of the oceans might expand the geographic range of ciguatera, and increase rates of the illness, said Lewis, who was not involved in the new research.

The new study, then, might serve as a baseline comparison for the future.

"Given how variable ciguatera is, it might take decades for such changes to reach significance," Lewis said.