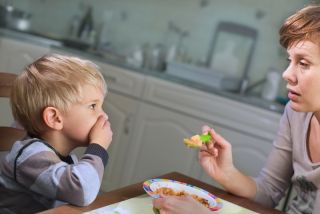 Almost everyone knows a 4-year-old who's never eaten an apple, subsists off hot dogs and spaghetti or eats only white food.

But a new study suggests that such picky eating isn't the norm, and that it may even hint at future mental health issues, in some cases. Children who are selective eaters are likelier to develop anxiety, depression and attention deficit hyperactivity disorder (ADHD), according to the study, published today (Aug. 3) in the journal Pediatrics.

It's not clear how or why picky eating may be tied to these conditions, but it may be that children who have heightened sensory experiences overall are also more sensitive to the food they eat, the researchers at Duke University wrote in their paper. [10 Ways to Promote Kids' Healthy Eating Habits]

Pediatricians tend to shrug off parents' fears about children who gag at eggs or shove their broccoli off their plates, saying it is just a phase that most kids will outgrow, the researchers said.

But the research team previously found that adults who are picky eaters tend to have higher rates of psychological disorders than the general public. And some studies suggest that there are a lot of adult picky eaters out there, but because they have more control over what's on their plates than children do, they can conceal their food likes and dislikes, said Marcia Pelchat, a psychologist at the Monell Chemical Senses Center in Philadelphia, who was not involved in the new study.

To see whether picky eating was associated with mental health issues in children, the Duke researchers asked the parents of about 3,400 preschoolers to fill out several questionnaires about their children's eating habits, and signs of depression, anxiety, ADHD and other psychological disorders, as well as their sensitivity to sensory experiences. About two years later, the team evaluated a subset of the little ones again.

The researchers considered the kids who only ate certain foods as having a "moderate level" of selective eating, whereas kids whose range of foods was so limited that it made it difficult for them to eat with others were considered as having "severe" selective eating. (Because so many kids avoid foods like broccoli and other cruciferous veggies, the team didn't consider hating those foods as a sign of picky eating.)

Among all children in the study, about one-fifth had at least moderate levels of selective eating, and 3 percent of parents reported severely restricted eating. Compared with the children with no eating issues, the moderate and severe picky eaters were more likely to suffer from anxiety, depression and ADHD, both at the time of the survey and in the two-year follow-up.

Cause, effect or neither?

It's possible that picky eating causes such unpleasant mealtime battles that it increases family discord, and indirectly leads to anxiety and other mental health conditions, Pelchat said. But it's also likely that the kids with a predisposition to anxiousness may simply have more fears surrounding food, Pelchat said.

On a subconscious level, it may be that "if you have tremendous anxiety, for example, it is threatening to put food in your mouth," Pelchat told Live Science. Humans have an adaptive tendency to avoid eating food that tastes weird or raises anxiety — this can prevent poisoning, she said. It may be that this tendency goes further than necessary in some people.

For instance, some of the most common foods in the "reject" pile have a slimy or gelatinous texture, or textural transitions (think bread with nuts in it, or tomatoes, which have crunchy seeds, slimy insides, mealy flesh and tough skin). In humans' evolutionary past, such textures may have been tipoffs that something was spoiled or unsafe to eat, she said.

As for ways to overcome picky eating, there's not just one method that works, Pelchat said. But there are definitely some no-nos.

"What we found — and others have kind of confirmed — is that being a short-order cook and catering to the child is not helpful," Pelchat said. "Punishing the child does not work, and rewarding or bribing does not work."

Instead, taking pleasure in food, worrying less about it, taking time to prepare food and getting kids involved in the effort may help kids gradually reframe their experience with food, Pelchat said.

But there's no evidence to suggest that working to overcome such picky eating on its own will help a child with anxiety or depression, Pelchat noted.