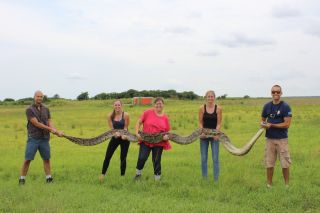 Interns practiced handling the giant python before it was euthanized and dissected by researchers.
(Image: © USGS)

A giant python — about as long as a shipping container — that was captured in Everglades National Park in Florida earlier this month has now been euthanized, authorities say. The accidental finding of this snake shows how easily even huge pythons can remain hidden in Florida's swampy south, experts say.

The huge python was hanging out on the side of a walking trail when a scientist scooped the animal up. The creature weighed a whopping 133 lbs. (60 kilograms), and at 18-feet, 3-inches (5.6 meters), was almost as long as the largest python ever captured in the state of Florida, which was 18-feet, 8-inches long (5.7 meters). Just last year, another huge python, measuring 18-foot, 2-inches long (5.5 meters) was shot and killed in the Everglades.

"The population is established and invasive in Florida, and probably all the Burmese pythons we find today were born in the wild in Florida," said Bryan Falk, a biologist who studies invasive species with the United States Geological Survey(USGS) at Everglades National Park. But despite efforts to fight the growing population of invasive snakes, the reptiles are still thriving.

Part of the problem is that even the largest Burmese pythons are "cryptic in nature" and "surprisingly difficult to find," Falk said.

Burmese pythons are native to Southeast Asia, and only established a foothold in the Florida ecosystem after they were released into the wild by (or escaped from) pet owners and breeders, Falk told Live Science in an email. [Photos: Giant Pythons Invade Everglades]

Some of the pythons now slithering through the Everglades may also have arrived there after Hurricane Andrew, which whipped through Florida in 1992 and destroyed facilities that once housed these exotic animals, according to Florida Fish and Wildlife Conservation Commission. The huge snakes thrive in swamps where they survive using their keen hunting skills — grabbing small animals with their teeth and then constricting (slowly squeezing) the prey with their immense bodies. In Florida, the pythons prey on about 40 species of mammals and birds, and recent declines in local animal populations have been attributed to the hungry snakes, said Falk.

Some scientists believe the snakes pose a threat to certain endangered or vulnerable species, including the Key Largo woodrat and the round-tailed muskrat, according to a report by the USGS. But not even the Everglades' most fearsome native predator, the American alligator, is safe from the python's clutches — pythons have been known to eat these huge reptiles, Falk said.

Since pythons have no known predators in the swamps, many scientists believe it should be up to humans to keep the snake's numbers in check.

"We sometimes use the metaphor of an oil spill to describe the management of invasive species. The first step is to stop the spill, and there are now both federal and state laws that regulate ownership of Burmese pythons and other large constricting snake species," Falk said. "The second step is to clean up the spill, and — along with a large number of cooperators — we are undertaking research to learn how to best do that."

Before the snake was euthanized, interns working with the USGS on invasive species control practiced handling the reptile, which was significantly larger than most pythons that park staff usually encounter, Corrigan said.

Although their size is intimidating, these snakes pose very little threat to humans, Falk said.

As with all pythons captured in Everglades National Park, scientists performed a necropsy (animal autopsy) after the snake's death. The necropsy confirmed that the python was a female, and showed that the animal had not reproduced so far this season. Studying the insides of these animals helps scientists better understand the creatures and how they interact with their environment, Falk said.

For example, in 2012, researchers cut open a 17-foot, 7-inch (5.3 m) long Burmese python and found an astonishing 87 eggs inside. By studying egg-carrying females, scientists hope to understand how people might control the rising python population, Kenneth Krysko, a herpetologist with the Florida Museum of Natural History, told Live Science in 2012.

The snake found this month wasn't carrying any eggs, however, so scientists weren't able to glean any new information about the species' reproductive habits. The creature's stomach was also empty, according to the USGS.