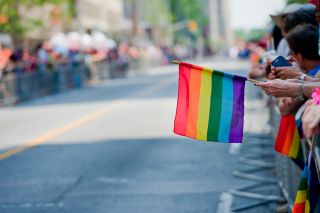 In the wake of the U.S. Supreme Court's decision to legalize same-sex marriage nationwide, many gays and lesbians celebrated. A new study suggests another reason for the community to cheer: Subconscious attitudes toward lesbian and gay people are improving.

A quick glance at most public opinion polls reveals that explicit attitudes toward gays and lesbians have been on the upswing for some time. For example, more than half of Americans — 53 percent — told the Gallup organization that they supported same-sex marriage in 2011, up from 27 percent in 1996. Another Gallup poll found that moral approval of homosexuality rose from 44 percent in 2006 to 59 percent in 2013.

But were these attitude changes genuine, or were people just feeling less free to air their prejudices publicly? To find out, researchers turned to a measure of implicit, or subconscious, attitudes toward gays and lesbians. They found a 13.4 percent drop in subconscious bias toward those groups between 2006 and 2013. [5 Myths About Gay People Debunked]

The finding is surprising, because implicit attitudes are notoriously hard — some would say nearly impossible — to budge, said study researcher Erin Westgate, a doctoral student at the University of Virginia in Charlottesville.

Westgate and her colleagues used a measure called the Implicit Association Test, which asks people to make snap judgments on how to categorize a person or concept. For example, the words "gay people" and "bad" might appear on one side of a computer screen, with the categories "straight people" and "good" on the other side. Images of straight or gay couples, or positive and negative words, would then flash on-screen to be categorized.

If a person holds implicit negative attitudes toward gay people, they'll be quicker to correctly sort words and images into the "gay" and "bad" categories than if "gay" and "good" appear on the same side of the screen, the researchers said. The Project Implicit website has examples (and actual studies that anyone can try).

Between Feb. 6, 2006, and Aug. 10, 2013, 683,976 people took the Project Implicit test on attitudes toward gays and lesbians — that's seven and a half years of daily data. The recorded attitudes showed a definite shift in implicit attitudes, toward greater positivity. And that shift became faster with time, the researchers said.

"It has a slow, slow downward slope that then begins accelerating around 2010," Westgate said, referring to the drop in subconscious bias.

Survey respondents also reported their explicit attitudes toward gays and lesbians. These became more positive over time, too, with anti-gay bias dropping by 26 percent since 2006. The gap between the 26-percent drop in explicit bias and the 13.4-percent drop in implicit bias is a bit of a mystery, Westgate said. One of the possible reasons for the gap is likely that some people said what they thought they should be saying, to be perceived as socially acceptable, she said. [10 Milestones in Gay Rights History]

But another possibility is that people change their conscious minds first, and their subconscious takes some time to catch up, Westgate said.

"People may change their minds explicitly first and decide, for instance, to be more tolerant and egalitarian in their attitudes, but it may take a while for it to trickle down into gut feeling," Westgate said.

This notion fits another quirk in the data. Hispanic, white, female, liberal and young adult participants showed the biggest drop in implicit bias over the time period. Meanwhile, blacks, Asians, men, conservatives and older participants showed a smaller drop in implicit bias — but these groups reported the biggest changes in their explicit attitudes. The finding highlights how implicit and explicit attitudes don't always line up, Westgate said.

A blockbuster study on attempts to change attitudes about gay marriage was recently retracted after one of the authors noted irregularities in the data. The doctoral candidate who led the study later admitted misrepresenting some of the data and lying about the study's funding, but denied charges that he had faked data outright. However, he said he had destroyed the raw data that would exonerate him from those changes.

The exciting thing about the new research, published July 23 in the open-access journal Collabra, is that cultural shifts on implicit attitudes just aren't common, Westgate said. For example, the election of Barack Obama as president didn't alter implicit racial attitudes at all, according to a 2010 study published in the Journal of Experimental Social Psychology.

But gays and lesbians may be a special case, Westgate said, because representation of these groups and their issues has increased across the media and in high-profile legal cases.

"All of this may be accumulating into a larger sense of a cultural shift," she said.