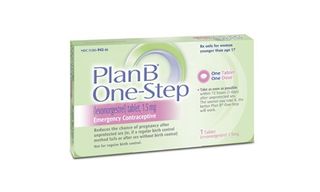 The percentage of teen girls who use emergency contraception, sometimes referred to as the "morning-after pill," has increased considerably over the last decade, according to a new report.

A survey conducted from 2011 to 2013 showed that, among females ages 15 to 19 who have had sexual intercourse, 22 percent said they had used emergency contraception at least once in their lives. That's up from 8 percent in 2002, according to the new report from the National Center for Health Statistics.

Emergency contraception pills, such as Plan B One-Step, can prevent pregnancy after unprotected sex or contraceptive failure if taken within 72 hours. Plan B contains a high dose of levonorgestrel, the same hormone found in most birth control pills. The drug prevents pregnancy by stopping the release of an egg from the ovary. It does not affect an existing pregnancy. [7 Surprising Facts About the Pill]

In 2013, the Food and Drug Administration approved Plan B as a nonprescription drug for women who have the potential to bear children. This ruling meant that teenagers could purchase Plan B over the counter, without a prescription. Before this ruling, women under age 17 needed a prescription to buy Plan B.

Dr. Metee Comkornruecha, an adolescent medicine specialist at Nicklaus Children's Hospital in Miami, who was not involved in the study, said the increase in emergency contraception use among sexually active teens was likely due mainly to an increase in awareness and education about this form of contraception.

It's a little too early to know whether the 2013 FDA ruling played a role in the rise in teen use of emergency contraception, Comkornruecha said.

The implications of the new findings are mixed, he said.

"I think it's good that there are more young women using this emergency contraception," given that teen pregnancy is linked with a number of negative consequences, including not finishing high school and having less financial stability, Comkornruecha said.

"At the same time, that probably means that they're either using condoms inconsistently," or if condoms are breaking, they are not using more reliable forms of contraception like the birth control pill, Comkornruecha said.

"It means that something's still going wrong in the system in terms of protecting themselves," he said.

The rise in emergency contraception is likely contributing to the decline in teen births, although it's not clear how much it is contributing, Comkornruecha said.

The new report also found that teenage sex in general is on the decline. From 2011 to 2013, 44 percent of teen girls and 47 percent of teen boys reported never having sex. That's a decrease of 14 percent for females and 22 percent for males in the last 25 years, the researchers said.

"Understanding these patterns and trends in sexual activity, contraceptive use, and their impact on teen pregnancy can help provide context regarding the recent decline in the U.S. teen birth rate," the researchers said.