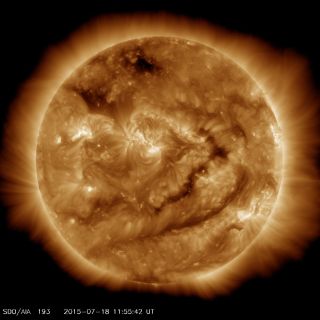 A scientist who claims waning solar activity in the next 15 years will trigger what some are calling a mini ice age has revived talk about the effects of man-made versus natural disruptors to Earth's climate.

Valentina Zharkova, a professor of mathematics at Northumbria University in the United Kingdom, used a new model of the sun's solar cycle, which is the periodic change in solar radiation, sunspots and other solar activity over a span of 11 years, to predict that "solar activity will fall by 60 percent during the 2030s to conditions last seen during the 'mini ice age' that began in 1645," according to a statement.

At the National Astronomy meeting in Llanduno, north Wales last week, Zharkova said that a series of solar phenomena will lead to a "Maunder Minimum," which refers to the seven decades, from 1645 to 1715, when the sun's surface ceased its heat-releasing magnetic storms and coincided with the Little Ice Age, a period of chillier temperatures, from around 1550 to 1850 in Europe, North America and Asia, according to NASA. [Top 10 Ways to Destroy Planet Earth]

"The upcoming Maunder Minimum is expected to be shorter than the last one in 17th century (five solar cycles of 11 years)," Zharkova told Live Science in an email. "It will be lasting about three solar cycles."

However, many scientists are not convinced. Georg Feulner, the deputy chair of the Earth system analysis research domain at the Potsdam Institute on Climate Change Research, has studied the effect a solar minimum might have on Earth's climate. His research has shown that temperature drops correlated to a less intense sun would be insignificant compared with anthropogenic global warming, according to the Washington Post.

Regarding the Maunder Minimum predicted by Zharkova, Feulner said, "The expected decrease in global temperature would be 0.1 degrees Celsius at most, compared to about 1.3 degrees Celsius since pre-industrial times by the year 2030," Feulner told the Post. Furthermore, this isn't the first time research has predicted waning heat from the sun, to which experts also said that man-made global warming won't be trumped.

Solar cycles and the Maunder Minimum

Solar cycles rise and fall over an 11-year cycle, though each cycle is unique. The sun can emit extreme ultraviolet and X-ray emissions that heat the part of the sky where planes fly. "Although the change in total solar irradiance seems too small to produce significant climatic effects, there is good evidence that, to some extent, the Earth's climate heats and cools as solar activity rises and falls," wrote David Hathaway, a solar physicist with NASA's Ames Research Center, in a 2010 review paper published in the journal Living Reviews in Solar Physics.

The Maunder Minimum was named by solar astronomer John Eddy in 1976 after E.W. Maunder, an English scientist who, along with German scientist Gustav Spörer, first noticed the decrease in solar activity in the 1890s, according to the New York Times.

“I have re-examined the contemporary reports and new evidence which has come to light since Maunder’s time and conclude that this 70-year period was indeed a time when solar activity all but stopped,” Eddy wrote in the Times.

Eddy looked through historical documents dating all the way back to Galileo to find any mention of visual observations of sun spots — everything he found corroborated, though to double check, he looked to some hard data.

Carbon-14, the radioactive isotope that is associated with living things, correlates with solar activity. The isotope is produced in the upper atmosphere when cosmic rays hit nitrogen-14 and convert it to carbon-14. Increased solar activity reduces the amount of cosmic rays that penetrate the atmosphere, decreasing carbon-14 formation. Eddy determined that the carbon-14 measurements in tree rings indicated a period of lower solar activity from 1450 to 1540, during a period Eddy called the Spörer Minimum.

In a paper detailing the study published in the journal Science in 1977, Eddy pointed out that both the MaunderMinimum and the Spörer Minimum happened during the coldest intervals of the Little Ice Age.

The Little Ice Age saw rapid expansion of mountain glaciers, especially in the Alps, Norway, Ireland and Alaska. There were three cycles of particularly chilly periods, beginning around 1650, 1770 and 1850, each separated by slight warming intervals, according to NASA. Although the Maunder Minimum corresponds with the first of the three cooling periods, the connection between solar activity and terrestrial climate are topics of on-going research, according to NASA. [See Photos of Greenland's Gorgeous Glaciers]

Some historical records peg the onset of the Little Ice Age earlier, to around the year 1300, which includes the Spörer Minimum. Records are more robust for the later part of the millennia-long cooling, with figures like Charles Dickens' writing about white Christmases, and records of Mary Shelly spending an unusually cold summer in 1816 indoors, where she and her husband shared horror stories, one of which became "Frankenstein," according to climate scientist Michael Mann in Volume 1 of the Encyclopedia of Global Environmental Change (Wiley, 2002).

"The Little Ice Age may have been more significant in terms of increased variability of the climate, rather than changes in the average climate itself," Mann wrote. Furthermore, the most dramatic climatic extremes happened with year-to-year temperature changes, rather than prolonged multiyear periods of cold.

Mann points to atmospheric circulation patterns, like the North Atlantic Oscillation, to explain some of the regional variability during the Little Ice Age. Although the coldest year in Europe and over much of the Northern Hemisphere was 1838, temperatures were relatively mild over significant portions of Greenland and Alaska during the same year. A large volcanic eruption in Cosigüina, Nicaragua, in 1838 may have emitted aerosols that circulated through the atmosphere, deflecting incoming solar radiation and cooling the air.

Also, Dickens' white Christmases may have benefited from the 1815 eruption of the volcano Tambora in Indonesia.

Although solar activities can align with changes in temperatures, there are many processes that contribute to climatic variations, and human-induced climate change will likely prove too big a force for muted solar activity to influence.