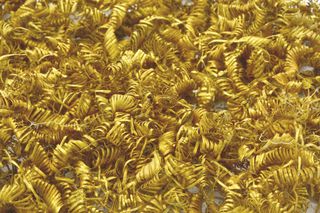 A pile of 2,000 tangled gold spirals that bring to mind heaps of the fairy tale princess Rapunzel's golden locks were recently unearthed in Denmark.

Archaeologists discovered the 3,000-year-old delicate, glittering coils — each one measuring up to 1.2 inches (3 centimeters) long — in the town of Boeslunde, on the Danish Island of Zealand, which hosts almost half of Denmark's population.

Like Rapunzel's magical locks, the Bronze Age gold spirals may have had a sun-derived power, the archaeologists said. "The sun was one of the most sacred symbols in the Bronze Age and gold had a special magic," Flemming Kaul, a curator at The National Museum of Denmark who co-discovered the gold, said in a statement that was translated from the original Danish. [See Photos of the Newly Discovered Gold Spirals]

Although the spirals' original use is unknown, it's possible they adorned cords that decorated hats and parasols, Kaul said. "The fact is that we do not know, but I tend to believe they were part of a priest king's costume or headwear," he said.

It's possible the priest king decked himself in gold, embellishing his cloak and hat with the spirals. "Gold has the color of the sun, it is shining like the sun, and it is indestructible, immortal and eternal," Kaul said. The priest king may have sacrificed his treasure to the sun during rituals, and kept the gold safe in a wooden box when he was feeling less reverential, he added.

Kaul thinks modern-day Boeslunde was once a sacred place for ancient people during the Bronze Age, because the site hosted rituals during which people offered gold to their gods.

The excavation site spread over a field in Boeslunde, where archaeologists found the big lump of spirals, as well as smaller bundles of three and four coils. The lump likely originally sat in a birch wood box with a leather lining, based on remnants found at the scene, the researchers said.

The recent discovery of just over half a pound (200 to 300 grams) of gold adds to Boeslunde's growing reputation as the gold capital of northern Europe during the Bronze Age.

"It shows that the place had a special significance for the Bronze Age people when they chose to sacrifice several kilos of gold," said Kirsten Christensen, the golden spirals' other co-discoverer and curator at the Museum Vestsjælland on Zealand.

Previous excavations in Boeslunde found 10 gold rings, six of which were large and heavy and four of which may have been "oath rings" — possibly used in connection with swearing oaths in courts andtypically found in sacrificial settings, Kaul said.

In the 1800s, local farmers found six gold vessels at Borgbjerg Banke, about 1,640 feet (500 meters) from the current archaeological site. The 10 rings weigh just under 8 pounds (3.5 kilograms) and the vessels, including bowls and beakers, weigh more than 2 pounds (1 kg).

Christensen and Kaul think there are more treasures awaiting discovery in Boeslunde, and with support from their respective museums they plan to continue their hunt, armed with metal detectors, in the near future.