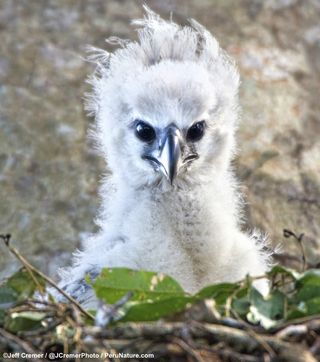 Conservationists at the Tambopata Research Center noticed the nest of a harpy eagle high in an ironwood tree.
(Image: © Jeff Cremer photography/PeruNature.com)

Harpy eagles nesting high above the understory of the Peruvian rainforest have been captured in a series of stunning new photos.

One of the eagles is a mama bird, while the other is an adorable eagle chick.

Because the giant bird of prey lives in the darkest portions of the rainforest and hunts its quarry in dead silence, many Peruvian Amazon birders can go their entire lives without seeing one, said nature photographer Jeff Cremer, who photographed the eagles. [See Gorgeous Images of the Adorable Harpy Eagle Chick]

"It's about as rare as seeing a unicorn," Cremer told Live Science.

Harpy eagles (Harpia harpyja) are imposing creatures. The massive birds can be up to 3 feet (0.9 meters) tall, with wingspans reaching 6 feet (1.8 m), Cremer said. Like stealth bombers, the birds of prey glide silently; they move through the shadows of the rainforest, hunting sloths, monkeys and even an occasional deer, Cremer said. To better hunt their prey, the eagles can turn their heads 180 degrees to face upward while flying through the dense rainforest, and can also fluff up their white head feathers, creating an acoustic funnel to direct sound to their ears.

When they do capture an unsuspecting animal, the eagles crush it, killing it instantly with their huge talons, which can produce hundreds of pounds of force, Cremer added.

"They have claws the size of an adult grizzly bear," Cremer told Live Science.

But the eagles are tough to spot, because they build their nests in the dark region between the forest's understory and canopy, high up in the trees, where the limbs just begin to branch out. In addition, logging and illegal mining have sharply reduced the harpy eagle's natural habitat and the majestic hunter is now considered near threatened by the International Union for the Conservation of Nature. As a result, seeing a harpy eagle chick in the wild in this region is incredibly rare, Cremer said.

Guides at the Tambopata Research Center in Peru first became aware of the birds of prey after noticing a nest high up in the trees. The guides also saw a harpy eagle fly over their heads, carrying the head of a half-eaten sloth to the nest, which contained a single chick. After monitoring the nest, Cremer and his colleagues decided to climb up to take photos.

Getting those pictures was no easy feat. The nest was perched high in the branches of an ironwood tree, about 100 feet (30 m) above the ground, so the team had to toss a slingshotlike rope up to the branches and then ascend using special climbing gear.

Harpy eagles create just two eggs each laying season, but only one hatches; the other is a backup in case the first fails to hatch, Cremer said. Harpy eagle chicks typically stay in the nest for about a year. As that year goes on, the mama bird will come back to the nest with food less and less frequently, and the chick will gradually have to spread its wings and fly to find its own prey, Cremer said.