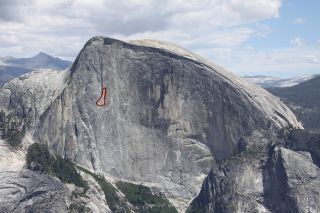 The northwest face of Half Dome in Yosemite National Park with the location and size of the rockfall area circled in red.
(Image: © Greg Stock/NPS)

A towering icon of Yosemite National Park just got a face-lift, as a huge slab of rock recently peeled off Half Dome, possibly changing the route up to the top for climbers.

"Our climbing rangers are still assessing the new situation up there, but it does seem like some relatively easy climbing has now been replaced with a blank face of rock," said Greg Stock, a Yosemite National Park geologist and climber. "So it is going to be more challenging here in the short term," he said.

The iconic Half Dome granite formation towers almost 5,000 feet (about 1,500 meters) above Yosemite Valley. The slab fell from one of the most popular cliffs for climbers, which rises over 1,000 feet (300 m) and takes between one to a few days to climb, Stock said. [See Photos of the World's Weirdest Balancing Rocks]

The fallen piece was triangular in shape and about 100 feet wide at the base and 200 feet along the long vertical side (30 by 60 m), Stock said. He said that the piece likely fell somewhere between 500 and 600 feet (150 and 180 m) and then "broke up into I don't know how many small pieces" that are now "just a field of rubble at the base of the cliff," he told Live Science.

Rockfalls like the most recent one off the northwest face of Half Dome happen about once a year, although smaller rockfalls happen weekly in Yosemite, Stock said.

The Half Dome rockfall was a classic "exfoliation" event, which is geology-speak for the process in which thin slabs of rock peel away from either a cliff or dome-shaped surface.

Exfoliations typically occur in very strong granite that is free of any cracks or fractures. When the smooth granite gets hit with rain, strong winds or tectonic movement (like an earthquake), its surface can be eroded and resulting tensions in the rock cause cracks that form parallel to the existing surface.

"When water gets in behind the exfoliation cracks, the water will pressurize the crack tip and either cause the crack to grow or exert an outward force that would cause the whole slab of rock to pop off," Stock said.

"Oddly for a rock of this size and from such an iconic cliff, I don't think anybody directly observed it," Stock said. He thinks the fall likely occurred on the night of July 2 or the morning of July 3 when it was raining. "We had some monsoonal thunderstorms and there was very intense rainfall — I think that the rockfall was probably related to rainfall," Stock said.