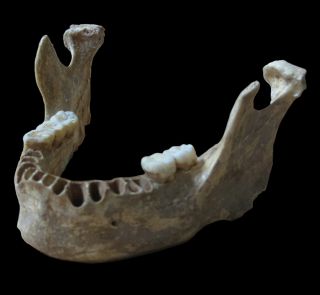 The jawbone of a human who lived between 42,000 and 37,000 years ago showed some Neanderthal features.
(Image: © MPI f. Evolutionary Anthropology/ Paabo)

One of the earliest modern humans in Europe had a surprisingly recent Neanderthal ancestor, revealing the two species likely interbred there, according to a new study.

The Neanderthal relative was so close to the modern human on the family tree that it could have been the equivalent of a great-great-grandparent, the research suggests.

The finding is revising scientists' understanding of when and where humans and Neanderthals interbred, as it suggests humans had sex with Neanderthals more recently than was previously known.

The new analysis focuses on a jawbone from Oase 1, an early modern human found in Peștera cu Oase ("Cave with Bones") in southwestern Romania in 2002. Anatomically modern humans populated Europe between 45,000 and 35,000 years ago. Oase 1 lived sometime between 42,000 and 37,000 years ago, making him one of Europe's earliest modern humans. [See Photos of Humanity's Closest Relative]

The researchers chose to study Oase 1 because the jaw showed some Neanderthal characteristics. The skull of another early human, Oase 2, found nearby also appeared to have Neanderthal traits.

The large spans of Neanderthal-like segments in Oase 1's genome indicate that one of his human ancestors interbred with a Neanderthal less than 200 years before he lived.

"One of Oase 1's fourth- to sixth-degree relatives was a Neanderthal," study co-author Qiaomei Fu, a postdoctoral fellow at the Harvard Medical School Department of Genetics, told Live Science.

The new finding builds on work led by Svante Pääbo, of the Max Planck Institute for Evolutionary Anthropology in Leipzig, Germany, and Harvard University's David Reich, which, in 2010, resulted in the first Neanderthal genome ever sequenced. The landmark study answered the long-standing question of whether Homo sapiens and Homo neanderthalensis interbred before humanity's closest relatives went extinct about 35,000 years ago. It showed that interbreeding likely did happen, with Neanderthals contributing roughly 1 to 4 percent of the genomes of all humans living today outside of sub-Saharan Africa.

In the new analysis, an international team of researchers, including Pääbo and Reich, found that 6 to 9.4 percent of Oase 1's nuclear DNA (located inside a cell's nucleus) was derived from Neanderthals — a higher percentage than has been found in any other modern human genome sequenced so far.

"The Oase 1 genome has several big Neanderthal-like segments, which is a quite lucky and unexpected thing," Fu said.

The Neanderthal contribution to the Oase 1 genome is between 2.3- and 3.6-fold larger than the Neanderthal DNA found in the genomes of populations living today outside sub-Saharan Africa and those of four other early modern humans from Russia and Luxembourg whose genomes have been sequenced. One of those ancient humans is even older than Oase 1, Fu said.

Where the action happened

The size of Neanderthal segments in human DNA suggest that the two species mated 37,000 to 86,000 years ago. But where and how often they did so have remained a mystery.

East Asians and Native Americans have more Neanderthal DNA than Europeans, suggesting that more interbreeding happened with the ancestors of eastern non-Africans than with Europeans, the authors wrote in their paper, published today (June 22) in the journal Nature. Until now, there's been little genetic evidence that early humans interbred with Neanderthals once they got to Europe.

"Analyses of present-day genomes have not yielded any evidence that Neanderthals mixed with modern humans in Europe, despite the fact that Neanderthals were numerous there and cultural interactions between the two groups have been proposed," Fu said.

However, the new study is changing that: The proximity of a Neanderthal to Oase 1 on the family tree suggests the two species continued interbreeding long after humans first left Africa and entered the Near East. Humans and Neanderthals were mating "later as well, and probably in Europe," the authors wrote.

However, Oase 1 didn't leave much of a mark on Europe. He shared more gene variants with present-day East Asians and Native Americans than with Europeans, even though he lived in Europe, the researchers said.

"He may have been a member of an initial early modern human population that interbred with Neanderthals but did not contribute much to later European populations," Fu said.