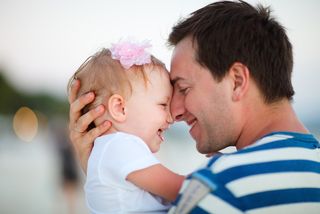 The moment a newborn baby pops into a family, parents often stop using their first names and instead start calling each other "daddy" and "mommy."

Instead of saying, "I'll get Jennifer," a new father might say, "Daddy will get Mommy."

What's with the name switch? What happened to their first names, and pronouns like "I" and "she"? [6 Ways Dads Win at Parenting]

Live Science couldn't find any formal research on the topic, but spoke with two experts who had ideas about the science behind the name change.

"They're using the terms that they want the child" to use, Pellerin said. Even the parents of a newborn are "looking forward to that time when the baby can call them 'mama' or 'dada.'"

Studies show that "mama" and "dada" are easy to say possibly because they have patterns and repeating sounds. ("Papa" in Italian and "tata" (grandpa) in Hungarian are other examples.)

Parents may also avoid using pronouns such as "I" or "you" because they are "too abstract and it's somewhat confusing to kids," said Emie Tittnich, an infant mental health specialist at the University of Pittsburgh.

Tittnich recalled watching a mother sit with a child who was crawling through a tunnel made of cloth.

"The tunnel was wiggling, and the mother said to her, 'Oh, it moved because mommy wasn't holding onto it,'" Tittnich said. "Parents will use those words to help their children learn the role names and also to indicate the relationship, 'mommy and me.'"

Children usually don't understand pronouns until they are 2 or 3 years old, Tittnich said. And even at that age, the pronoun children may use first is "me," because they realize it refers to them.

As the child gets older, they still may call their parents "mom" and "dad," but also realize that their parents have first names. This usually happens at around age 5, Pellerin said.

Parents may also teach children their first names in case the child gets lost, and needs to tell someone whom they're looking for, Pellerin added.

"It usually takes the child awhile to understand that the same person can be called two different names," she said. After that realization kicks in, "You'll start to see the parents refer to each other by their names in front of the child," except for sometimes saying things like, "'Go ask your father what he thinks,'" she said.

But not everyone makes that transition.

"I know there are some people who carry it too far," Pellerin said. "You'll see a couple whose children are long grown, and they still refer to each other as 'mom' and 'dad' or 'mother' and 'father.'"