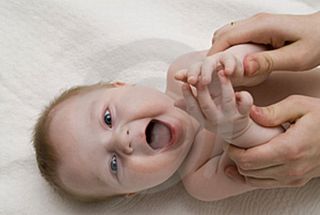 Bilingual parents and the experience of hearing two languages may give babies an early learning advantage — and all before they know how to speak.

A new study shows that bilingual babies quickly adapt to different learning cues at seven months old compared with babies from single-language households. The findings may lead researchers to rethink how hearing two languages trains the young brain, even before babies have learned how to formulate words.

This early learning advantage may not necessarily translate into higher intelligence later on in life. But it does reveal that babies benefit early on from having bilingual exposure, when they themselves still babble nonsense.

"We believe that the enhancement is due more to perception at this age, rather than [language] production," said Jacques Mehler, a cognitive neuroscientist at the International School for Advanced Studies in Trieste, Italy.

Scientists have known that babies begin absorbing some language fundamentals before they can speak, and that babies can tell the difference between sounds from two sufficiently different languages. Previous studies have also shown that regularly using two languages improves some thinking processes among both children and adults.

However, few if any other studies have compared the cognitive functions of bilingual and monolingual babies at a very young age. Mehler and fellow researcher Agnes Kovacs recruited "crib bilinguals" from families in the Trieste area of Italy, where parents spoke to infants from birth using both Italian and Slovenian mother tongues.

The researchers taught bilingual and monolingual babies to look at one side of a screen in anticipation of a visual "reward" image of a puppet, after the infants first learned to associate a sound cue with the image. The visual treat was then switched to the other side of the screen, so that researchers could see how quickly babies would learn to switch their anticipatory look to that other side.

This clearly showed a bilingual baby advantage in thinking that involved so-called executive function, which helps regulate abilities such as being able to start and stop actions. It also indicated that having early bilingual exposure could train the mind in a more general sense, rather than just a language-specific sense as some researchers had suggested.

"These babies don't know how to speak yet," Mehler told LiveScience. "No one can attribute knowledge of two languages to them."

"My conclusion is that it's a very particular component of our cognitive toolbox, and early learning certainly has no negative effect," Melher said. But despite suggestions from other researchers, he personally doubted whether such early bilingual training leads to improved IQ or better test scores.

Full study results appear in the April 13 issue of the journal Proceedings of the National Academy of Sciences.