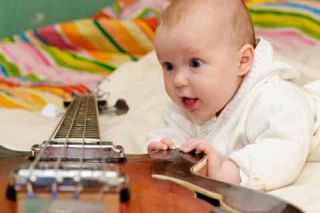 In a new study, when the rhythm was disturbed, particularly by omitting the downbeat, the infant brain responded with an error signal. Image
(Image: © Dreamstime)

Newborns can follow a rhythm, a new study has found, suggesting rocking out is innate.

The finding, published in the Jan. 26 issue of the journal Proceedings of the National Academy of Sciences, adds to growing evidence that the newborn brain is not the blank slate it was once thought to be.

Rather, scientists have shown, at birth we already have sophisticated methods for interpreting the world. Discrimination may be crude, explained lead researcher István Winkler of the Hungarian Academy of Sciences in Budapest, but "the basic algorithms are in place already."

This may be particularly true when it comes to sound. Infants as young as 2 days old can process pitch and tell if a series of notes are rising or falling in scale. And it is now known they have rhythm, too.

Newborns can't exactly swing their hips to prove they can jive, so Winkler and his colleague Henkjan Honing of the University of Amsterdam monitored the brains of 14 infants listening to variations of a rock rhythm — complete with drum, snare and high hat cymbal.

When "metrically-unimportant portions" of the beat were silenced, nothing much changed among the auditory-related activity in the brain, Honing said. But when the rhythm was disturbed, particularly by omitting the downbeat, the infant brain responded with an error signal: An expectation for a rhythmic pattern was not met.

"A baby's auditory system is working the same way as an adult's, in that it is always making predictions," Winkler said. If the prediction is incorrect, an error signal helps gauge "how much you are off the actual target," he said.

While spoken language can take more than a year to develop, "music is one of the earliest things parents have with their children," Honing said.

On a note-to-note level, adult speech usually lacks the pulsing regularity of music, but when parents talk to babies, they instinctively switch to melodic and rhythmic intonations "as a way of communicating emotional messages," Honing said.

Infants can perceive anger, happiness and sadness from a caregiver's cooing and baby babble, he said.

A study last year found that babies as young as 5 months can distinguish an upbeat tune, such as "Ode to Joy" from Beethoven's Ninth Symphony, from other gloomy tunes.

At a structural level, certain conversation protocols require rhythmic synchrony and are likely unique to humans, Winkler said. While other animals, such as birds and frogs, do have significant auditory skills, few, if any, perceive rhythm or carry on a dialogue, he said.

"If you ever talk to someone who will really not synchronize with you, for example like with a computer," Winkler said, "you have the feeling that you can not communicate."

An infant's perception of rhythm may make him receptive to the distinctively human tendency to teach, Winkler said. "Apes never teach," he said, explaining that baby apes learn by simply emulating their parents. But humans engage in a sing-song form of information exchange, where the recipient of new knowledge must respond in a synchronous way (not too fast, not too slow) to convey understanding.

Therefore, evolution may have favored brains wired to rock for learning purposes, said Winkler, and "music went along for the ride."