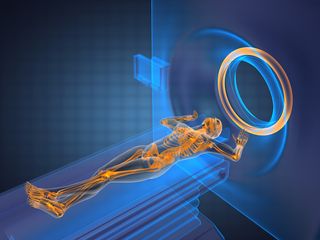 When a California woman with cervical cancer underwent a body image scan, doctors noticed bright areas in her lymph nodes, suggesting her cancer had spread. But it was only after surgery to treat the cancer that they realized the real reason for those bright spots: her tattoos.

The 32-year-old woman with four children had recently been diagnosed with cervical cancer. In November 2012, her doctors requested the imaging scan to check to see if the cancer had spread (metastasized) to other parts of her body.

The type of scan the doctors wanted was a PET/CT fusion scan, which combines technology from both PET and CT scans, and requires that patients receive an injection of a radioactive tracer that makes tumors appear as bright spots on the scan.

The scan showed not only the woman's cervical tumor, but also bright spots on the lymph nodes in her pelvis, which looked suspiciously like cancer metastases, the researchers wrote in their report of her case, published today (June 8) in the journal Obstetrics and Gynecology.

To treat her cervical cancer, the woman had surgery to remove her uterus, cervix, fallopian tubes and pelvic lymph nodes.

But when doctors later examined cells from the woman's lymph nodes under a microscope, they saw that the cells contained deposits of tattoo ink — not cancer. The woman had more than 14 tattoos on her legs. [16 Oddest Medical Cases]

"Those lymph nodes that were lighting up brightly on the PET scan were doing so because of the tattoo pigment that was in the lymph nodes," said study co-author Dr. Ramez Eskander, assistant clinical professor of gynecologic oncology at the University of California, Irvine Medical Center, who treated the woman.

There have previously been reports of tattoo ink spreading to people's lymph nodes and showing up on PET scans in patients with other cancers, including breast cancer and melanoma. But this appears to be the first case reported in a patient with cervical cancer, Eskander said.

In this woman's case, seeing the brightly lit lymph nodes did not change the doctors' surgical plan, Eskander said. But it's important that doctors are aware that extensive tattoos could look like cancer on PET scans, because this could change the way they treat a patient. For example, if a doctor is convinced that a patient has metastatic cancer, he or she may suggest that the patient undergo chemotherapy and radiation right away, rather than surgery, Eskander said.

"Findings of possible metastatic disease on PET scans can certainly change management," Eskander said. "We want to make sure that people understand that these false positives could potentially arise in patients that have tattoos," he said.

The researchers did find that the woman had a small number of cancer cells in one of her pelvic lymph nodes, a condition that doctors call a "micrometastasis." But this micrometastasis was too small to have shown up on the PET scan, so it was only by chance that the doctors found it, Eskander said.

The woman didn't have any complications after her surgery, and she was allowed to leave the hospital after three days. She is now doing very well and doesn't have any evidence of cancer recurrence, Eskander said.