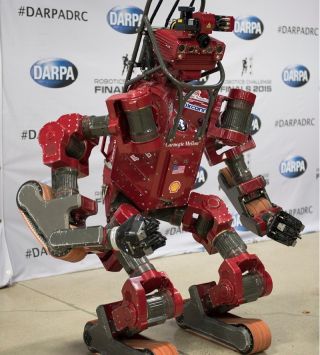 POMONA, Calif. ­— Watching a robot competition can be incredibly exciting, but things tend to move at a glacial pace.

But that didn't stop hundreds of people from showing up Friday (June 5) to watch the finals of the DARPA Robotics Challenge, a two-day competition that pits robots against each other and the clock in a simulated disaster response mission. A robot from Carnegie Mellon University in Pittsburgh, Pennsylvania, is in the lead so far, after completing all eight of the challenge tasks successfully.

The competition, hosted by the U.S. Defense Advanced Research Projects Agency, was inspired by the Fukushima Daiichi nuclear disaster, triggered by the 2011 earthquake and tsunami in Japan. After the tragedy, human workers were unable to go in and shut off a valve to prevent a gas explosion; but if they had been able to send in robots to do the job, the worst of the disaster may have been prevented, according to DARPA officials. [See Photos of the Robot Competitors in Action]

While impressive, the robots aren't exactly sprightly. Watching them move "isn't quite like watching paint dry, but it's more like a game of golf," Gill Pratt, the DARPA program manager in charge of the event, said in a news conference.

During the challenge, the teams attempted to complete eight tasks within one hour: driving a utility vehicle, exiting the vehicle, opening a door, drilling a hole in a wall, completing a surprise task, walking over a pile of rubble or clearing a path through debris, and walking up a short flight of stairs.

What's more, the robots attempted these challenges without a tether keeping them from falling over and despite the competition organizers deliberately disrupting the communications link between the bots and their human operators.

Slow and steady wins the race

The day started off slowly. None of the teams in the first round attempted the driving task, opting instead to walk or roll their way along that portion of the course. Team Aero, from Japan, wheeled most of the way down the sandy track, but tipped over. Even though it restarted from the beginning (with a time penalty), it never made it to the rest of the tasks. The robots from Team Valor (Virginia Tech), Team Grit (Colorado) and Team HKU (Hong Kong) all took a few steps, but either fell down or got stuck before the hour ran out. [Meet the Robot Finalists in the DARPA Challenge]

Things got more exciting when Team IHMC, from the Institute of Human and Machine Cognition in Pensacola, Florida, took the stage. Their robot, one of half a dozen Atlas robots built by the Waltham, Massachusetts-based company Boston Dynamics, successfully completed seven out of eight tasks ­— including a surprise task that involved pulling a lever — for a total of seven points. The bot was attempting to cross a pile of rubble when it tipped over and had to restart from an earlier part of the course. But it made it past the rubble the second time, to massive cheers. As it attempted the final task — climbing a set of stairs — it toppled over again, and then the time ran out.

The competition really heated up by the afternoon. The Worcester Polytechnic-Carnegie Mellon team, WPI-CMU, also completed seven tasks, including driving the vehicle and successfully exiting it. Later, Germany's Team Nimbro Rescue robot completed seven tasks in less than 35 minutes, wheeling its way into the lead. NASA's Jet Propulsion Laboratory Team, RoboSimian, put on an impressive performance with its hybrid design that allows it to alternate between moving on four-legs and wheels. The team from MIT also did well with its Atlas robot, despite a fall while getting out of the vehicle.

Reticent at first, the crowd grew louder as the day went on, cheering wildly when the robots achieved each task.

But the best performance of the day was Team Tartan Rescue's CHIMP robot, from CMU, which not only completed all eight tasks, but also was able to pick itself up after falling.

While the robots were competing, a slew of other robots — ranging from snakelike to inflatable — were on display at an Expo taking place nearby. During a break in the competition, MIT's cheetah robot "Spot" strutted and danced for an admiring crowd in its first public appearance.

The challenge robot will have another chance to prove themselves today (June 6), and the team that scores the most points in a single attempt in the least amount of time will take home the coveted $2 million first prize.

Unofficial rankings of top five teams, as of Friday:

Editor's Note: This article was updated at 1:57 p.m. ET June 6, to correct an error in the first-day rankings.