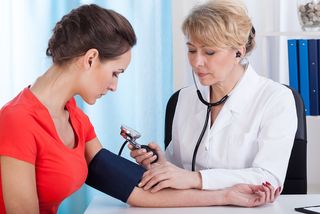 Imagine controlling high blood pressure with just a jab in the arm. Scientists are one step closer to this reality after creating an experimental vaccine that, in rats, provided six months of protection against high blood pressure.

If such a vaccine were to work in people, it could eliminate the trouble and expense of taking blood pressure medication daily, and also could revolutionize the treatment of hypertension in poor or rural communities, where people have limited access to medical care.

A study describing this latest advancement, led by researchers at Osaka University in Japan, appears today (May 26) in the journal Hypertension.

High blood pressure, or hypertension, is a common condition in which the force of blood against artery walls is high enough to damage these vessels and ultimately cause heart disease or stroke. There are numerous risk factors for the condition, including smoking, obesity, inactivity, family history and stress.

Nearly one-third of U.S. adults have high blood pressure, according to the Centers for Disease Control and Prevention; the prevalence is more than 40 percent among African Americans.

Doctors also often prescribe blood-pressure medication in addition to lifestyle changes. Effective and relatively safe medications include beta-blockers and angiotensin-converting-enzyme (ACE) inhibitors, both of which work by expanding arteries to ease the pressure of the blood flowing through them.

However, medications are expensive, and many people who are advised to either take the daily pills or change their lifestyle don't actually do so, said Dr. Hironori Nakagami, a professor of medicine at Osaka University and a co-author of the study.

"One of the problems is that patients sometimes forget to take their medication, which may trigger … a stroke or other cardiovascular event," Nakagami told Live Science. In the future, "the physician may select a vaccine therapy to control blood pressure to [better] prevent such cardiovascular events."

Traditional vaccines work by creating immunity against an infection, usually by introducing a weakened or dead virus or bacterium that the immune system can then learn to recognize and kill. In contrast, the experimental blood-pressure vaccine targets one of the body's own hormones, called angiotensin II, which raises blood pressure by causing blood vessels to constrict. (This hormone is the target of ACE inhibitors.)

Scientists have been attempting to develop a blood-pressure vaccine for nearly two decades, with little success. In 2008, doctors published a study in the journal The Lancet describing only modest results for one such vaccine in humans.

That was a peptide vaccine, meaning it was made of a chain of amino acids designed to elicit an immune attack on angiotensin II. The small, limited protection lasted only a few months, and the patients experienced the side effect of flulike symptoms.

In theory, DNA vaccines work by inserting themselves into DNA, turning human cells into factories that can pump out antibodies to attack pathogens or even cancer cells.

DNA vaccines represent a new frontier. However, they have not been approved for use in humans in any country, although several are being tested, according to the World Health Organization.

"We developed the DNA vaccine to induce anti-angiotensin II antibodies, which can bind angiotensin II and inhibit its function," Nakagami said. "But how to regulate the duration of antibody production is still unknown," he added, noting that this is why the protection against high blood pressure seen in the study was not permanent.

The researchers wrote that their study demonstrates that their DNA vaccine is safe, at least in rats, with no significant side effects.

"[We] will start human clinical trial[s] in a few years in Japan or other countries, and also move to develop a vaccine for heart failure for dogs," Nakagami said.

In 2005, the U.S. Department of Agriculture licensed the first approved DNA vaccine for animals in the United States, which protects horses against West Nile virus. (Vaccines for humans, in contrast, must be approved by the Food and Drug Administration.)