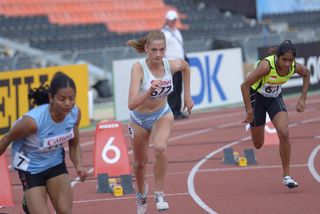 Elite women athletes are currently barred from competing in top-tier competitions, such as the Olympic Games and World Championships, if their testosterone levels are too high. But for women with naturally high levels, this regulation may be premature, as the only two large studies done on testosterone levels in professional athletes give conflicting results on how to define the normal levels for women, researchers argue in a new editorial.

Most studies have found that men's levels of natural testosterone (often called "T levels") are about 10 times higher than women's, and even the highest levels in women are still far below the lowest levels in men, the researchers said. It's less clear, however, whether higher T levels improve women's athletic performance.

Despite the lack of data, the 2011 policy of the International Olympic Committee (IOC) has already barred some women, such as Indian sprinter Dutee Chand, from competing on the world stage. [Men vs. Women: Our Key Physical Differences Explained]

"This policy excludes women with naturally high T" from competing, said Katrina Karkazis, a co-author of the new editorial published online today (May 21) in the journal Science, and a senior research scholar at the Stanford Center for Biomedical Ethics. "Imagine being a woman your whole life, and all of a sudden, you're told that even though you still are, and you have all the legal documents, you can't compete as a woman anymore.

"The impact of that on someone individually, but also in their social world, is incredibly profound," Karkazis told Live Science.

The policy may also lead women to have surgery that is not medically necessary, the co-authors said. At least four female athletes who were born with "intersex" characteristics — for example, internal testes that produce testosterone — have had surgery to remove these organs to reduce their testosterone levels, even though the surgery's only benefit to the women was that it allowed them to comply with a sporting policy.

Since the time the IOC policy was made, two important studies of the testosterone levels of were published. In one study, commissioned by the International Association of Athletics Federations (IAAF) and done during the 2011 World Championships in Daegu, South Korea, researchers analyzed the T levels of 849 elite female track-and-field athletes. The findings showed that just 1.5 percent of these athletes had T levels above the range sometimes considered normal for women.

But the Daegu results conflicted with those of an earlier study called the GH-2000, which was conducted primarily to see whether athletes were illegally doping with growth hormones, Karkazis said. In the GH-2000, researchers tested 446 men and 234 female athletes who were competing in a variety of Olympic events.

The GH-2000 results suggest that the range of "normal" female T levels may be larger than previously thought, said Karkazis, who co-wrote the editorial with Rebecca Jordan-Young, chair of women's, gender and sexuality studies at Barnard College in New York.

Based on the data, the policy that exists today is "grossly unfair," said Dr. Peter Sonksen, who was a senior author of the GH-2000 study and is a professor emeritus of endocrinology at King's College London.

"It's not making the sport any fairer; it's just disqualifying these poor individuals who happen to have this condition," said Sonksen, who was not involved with the new editorial. [7 Ways the Mind and Body Change with Age]

Neither study is perfect. Critics point out that the Daegu study did not include men, nor did it look at athletes in sports besides track and field. It also excluded intersex women. (The current policy lets intersex women compete if they can prove that their bodies are androgen resistant, meaning their cells lack the receptors needed to use the hormone, Karkazis said.)

However, the GH-2000 also had limitations, including that samples were taken shortly after the athletes competed, when T levels may be more variable than they are at rest, said Dr. Eric Vilain, a professor of human genetics at the University of California, Los Angeles and an adviser to the IOC for eligibility in sports.

The GH-2000 also did not identify whether the participants were doping with testosterone, which might explain some of the high T levels, said Vilain, who was not involved with the new opinion piece. (Sonksen argued with this point, telling Live Science that his study did exclude those with high testosterone levels that were due to doping. The researchers looked at women's levels of another hormone called luteinizing hormone, which are suppressed if a woman uses testosterone, he said.)

Vilain called the argument in the opinion piece "a little bit of a made-up controversy."

"It does not matter whether there is some overlap [of T between men and women] or no overlap at all," Vilain said. "What matters is, what is the best marker" to use to set men apart from women, he said.

Without a biological marker, sports regulators would have to ask athletes to identify their own gender, and some people might take advantage of that, he said.

Still, there is room for improvement, Vilain said. The policy does not discuss surgery, but when Vilain heard about the four women who had chosen to have surgery to lower their T levels, he "was outraged that it happened this way," he said.

Perhaps an independent doctor — one who is not invested in the athletes' sporting careers — could advise women who have high T to ensure they are fully informed about the risks and benefits of any surgery they are considering, he said. The policy could also benefit from more research looking at T levels in male and female athletes, he said.

"It's very hard to do policy if you don't have good data," Vilain said. "It's a shame that there are only two studies — including one that's clearly not up to par with, in my opinion, scientific standards — in terms of measurements of testosterone."

Editor’s note: This original version of this story was corrected on June 2, 2015. The original story incorrectly stated that the IOC policy was based on the findings of the Daegu study, but it was not. In addition, the story was amended to include Sonksen’s argument that his study did exclude women who were doping with testosterone.