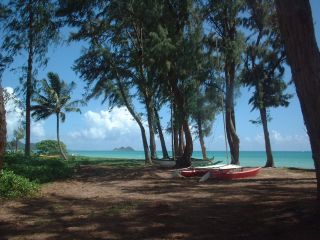 The best beach of 2015 is shaded, secluded and the perfect excuse for a Hawaiian vacation.

Oahu's Waimanalo Bay Beach Park took top billing in this year's Best Beaches in America list, a ranking compiled by Stephen Leatherman, a coastal scientist at Florida International University. Leatherman, who goes by the name of "Dr. Beach," judges each of about 650 publically accessible recreation beaches in the United States, each year picking the top 10 and crowning one the winner.

Waimanalo Bay Beach Park took the prize this year because of its parking (free!), amenities (bathrooms, picnic areas and an on-site caretaker), and safety (a lifeguard is on duty), Leatherman said. Plus, the island of Oahu recently instituted a new rule that's good for both public health and beach health. [See Photos of the Top 10 Best U.S. Beaches]

"They've done away with smoking at all their beaches," Leatherman told Live Science. "That's something I'm starting to add extra credit for, because the most common litter is cigarette butts on beaches."

It doesn't hurt that Waimanalo beach is beautiful, either. There are 5 miles (8 kilometers) of continuous white coral sand along this stretch of coast, Leatherman said. The water is a stunning turquoise color, and shade trees line the landward side of the beach. Looking down the coast, the Ko'olau Mountains rise dramatically against the horizon.

Natural beauty is one important criterion for Leatherman, who can boast of visiting every major recreational beach in the United States (plus quite a few nonmajor ones). He also considers safety, sand quality, access and amenities such as showers and restrooms when creating his annual rankings. That means that wilderness beaches such as the remote Shi Shi beach in Olympic National Park, Washington, aren't included — though they are stunning, Leatherman said. [The Top 10 Most Visited National Parks]

Other top 10 beaches, however, retain their spots on his list year after year. Last year's No. 2, Barefoot Beach Preserve County Park in Bonita Springs, Florida, keeps its No. 2 spot this year, thanks to fine sand and great swimming. St. George Island State Park, also in Florida, took the No 3. spot in both 2014 and 2015.

"Florida has 825 miles of sandy beach, clear water, white sand, clean sand, so there aren't any really bad beaches in Florida that I know of," Leatherman said.

Hawaii's Hamoa Beach on Maui takes this year's fourth spot on the list. This vegetation-lined beach sits inside a breached volcanic crater, and its salt-and-pepper sand is a mix of wave-beaten coral and lava. It's back to the East Coast for beach No. 5, the wild and beautiful Cape Hatteras on North Carolina's Outer Banks. This spot is notable for America's most famous lighthouse, which the National Park Service had to lift up and move 2,900 feet (884 meters) in 1999 to save it from beach erosion. Leatherman was there for the move, and remembers the crew foreman setting a glass of wine on a table inside the lighthouse as it was jacked up and transported inland with excruciating slowness. When the lighthouse was settled onto its new foundations, not a drop of wine had spilled, Leatherman said.

At No. 6 on the list, Cape Florida State Park in Key Biscayne, Florida, is notable for its own historic lighthouse and clear, green waters. Coast Guard Beach in Cape Cod, Massachusetts, comes in at No. 7, a move up from its No. 8 spot on the 2014 list. Kiawah Island's Beachwalker Park in South Carolina claims that No. 8 spot in its stead, with Delnor-Wiggins Pass Beach in Naples, Florida, coming in at No. 9. Rounding out the top 10 is Santa Barbara's East Beach, a cushy Southern California spot with volleyball courts, a 1920s-era bathhouse and a restaurant on site.

U.S. beaches in general are clean and safe, Leatherman said, but litter remains an ongoing concern. Projects such as beach nourishment can also move a beach up or down the list, depending on their success and the type of sand used, Leatherman said. His full list of criteria can be found at drbeach.org.

Leatherman also worries about beach safety. About 100 Americans a year, many of them children, die in rip currents on U.S. beaches, he said. Leatherman maintains a website, ripcurrents.com, with advice about how to spot and escape a rip current. These currents, which pull swimmers out to sea, can sometimes be identified by choppy or murky water or by debris floating seaward. The best way to stay safe if caught in a rip current is to "flip, float and follow," Leatherman said: Flip on your back, float to conserve energy, and propel yourself perpendicular to the current rather than against it.