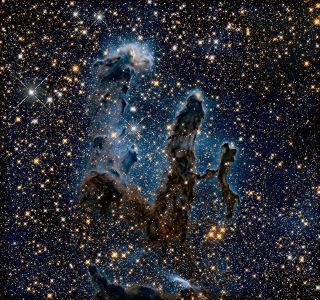 Spearing the sky like monolithic elephant trunks, the "Pillars of Creation" are a vast region of star-forming material located in the Eagle Nebula, about 6,000 light-years from Earth. These tendrils of gas and dust, made colorful by the radiation of bright young stars smoldering within, became a Milky Way landmark thanks to an iconic visible-light image taken by the Hubble Space Telescope in 1995.

Now, NASA scientists have shared a new view of the pillars, focusing instead on the infrared radiation normally invisible to human eyes. In the new infrared image (also taken by the Hubble Space Telescope), the colorful pillars fade to ghosts of their former selves, revealing a kaleidoscope of newborn stars within the dust.

The Pillars, which span about 5 light-years in length (that's about 3.5 times the diameter of our solar system), are natural incubators of star formation, thanks to their many dense pockets of hydrogen gas, according to NASA. As ever greater quantities of gas and dust pile into a single, gravitationally-dense area, that area heats up under the weight of the gathering material and may turn into the seeds of a star — also called a "protostar." If a protostar continues gathering mass and increasing in temperature enough to spark a nuclear reaction at its core, a full-fledged star is born.

As this image shows, the most active star-forming region within the Pillars is located at the tip of the largest pillar, which shimmers with what appears to be gauzy blue radiation. These dense, dusty regions shadow and cool the gas below them, according to NASA, allowing the lower reaches of the pillars to maintain their long, wispy figures.

For now, anyway. According to NASA astronomer Paul Scowen, who led the initial Hubble exploration of the Eagle Nebula in 1995, as the stars in the tip of the Pillars grow ever larger, their radiation will become stronger, slowly destroying the gas around them.

"The gaseous pillars are actually getting ionized, a process by which electrons are stripped off of atoms, and heated up by radiation from the massive stars," Scowen said in a 2015 statement from NASA. "The stars' strong winds and barrage of charged particles … are literally sandblasting away the tops of these pillars."

Perhaps that makes images like this one even more special. We will never see the Pillars of Creation exactly like this ever again.