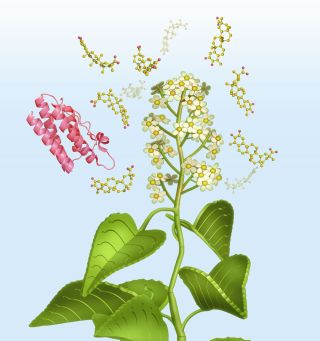 An extract made from a plant that is used in traditional Chinese medicine may help with weight loss, according to a new study done in mice.

In the study, the researchers found that obese mice that were given high doses of the extract for one week ate 80 percent less food compared with mice that did not receive the compound. After three weeks, the mice treated with the compound lost 45 percent of their body weight, while mice in the comparison group did not lose any weight.

However, it is not clear whether the extract would work in humans the same way as it does in rodents. "Mice and humans are not the same," said Dr. Eric Newman, a radiology resident at Jacobi Medical Center in New York, who was not involved in the study.

This weight-loss effect of the compound that was seen in the study was greater than the effect of bariatric surgery in mice, which typically results in the loss of 35 to 40 percent of weight, according to the study. (Bariatric surgery is an operation that makes the stomach smaller, and can help people with severe obesity lose weight.)

Despite the limitations related to the mice model used in the study, the compound does sound very promising, especially considering the lack of drugs currently available to treat people who are obese, Newman told Live Science.

If the results are confirmed in human studies, "it could be a powerful way to treat obesity and improve the health of many patients suffering from obesity and associated complications, such as heart disease, fatty liver and type 2 diabetes," study author Dr. Umut Ozcan, an endocrinologist at Boston Children's Hospital and Harvard Medical School said in a statement.

The compound, called celastrol, works by enhancing the action of leptin, an appetite-suppressing hormone that sends signals to the brain when a person is full and should stop eating, according to the study. Researchers have previously speculated that the lack of sensitivity to such signals in the brain may be one root cause of obesity. However, no drugs that could fix this issue had been found.

Celastrol can be extracted from a plant called the thunder god vine plant, which is used in traditional Chinese medicine to treat people with arthritis, the researchers said.

However, the safety of using celastrol extract for weight loss has not yet been tested in humans, the researchers said. More research is needed to see whether it is safe.

The problem with trying to lose weight through dieting is that it is hard for people to stick to a diet for a long time, Newman said, and that's why developing a pill for obesity would be helpful for weight loss. However, people should not get their hopes up at this point as "it will probably take years before [the new compound] is tested on humans," he said.

Moreover, for both weight loss and overall health, maintaining a healthy lifestyle including both exercise and good eating habits will always remain key, he said.

"It is going to take a lot more than just one pill to make people healthy," Newman added.

The new study was published today (May 21) in the journal Cell.