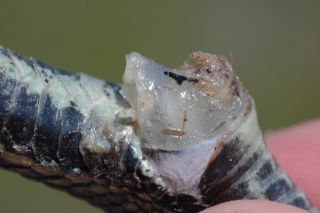 Every spring, red-sided garter snakes leave their hibernation burrows to engage in a frenzied jumble of mating. But a new study finds that doing the deed is no easy feat for males; in fact, they can spend up to a whopping 18 percent of their daily energy making special plugs that increase their chances of mating success.

Male red-sided garter snakes (Thamnophis sirtalis parietalis) are known to temporarily seal the females' reproductive body openings with a "large, gelatinous copulatory plug" after mating, according to the study. The plugs, the largest such seminal plugs among reptiles, not only prevent the sperm from leaking out of the female's body, but they also delay females from mating immediately with another male, the researchers said.

However, plug production is a costly endeavor, the researchers found. What's more, "Small males have a harder go of it, as they expend more energy per unit mass on their ejaculate than larger males," said the study's lead researcher, Christopher Friesen, a postdoctoral researcher of biological science at the University of Sydney in Australia. [The 7 Weirdest Animal Penises]

In the new study, the researchers figured out just how much energy these snakes spend on plug creation by isolating this task from other energy-demanding factors.

The scientists collected 48 male snakes in Manitoba, Canada, and put them together with females. But only half of the males were allowed to court and mate; the other half were foiled by a piece of tape cleverly placed over the females' organs.

Male snakes can only deposit one to two plugs a day, but that doesn't stop the animals from doing the deed. They'll still mate with females, even if they can't leave a plug. So in the study, the researchers compared energy usage in males that used plugs with the energy use in those that didn't. This allowed the scientists to separate the energy cost of courtship and mating from the energy cost of making the plug, they said.

The researchers found that the snakes' energy consumption over a period of nine days was about 50 percent higher than that for snakes during nonmating seasons.

And small snakes used up to eight times more energy per unit of body mass than the large snakes did. Still, despite the large energy demand of plug creation small snakes face, they may be smart to mate as soon as possible, instead of waiting until they're larger, the researchers said. Winters in Manitoba are harsh, and the snakes may not survive to get older and larger.

An "all-in" approach may be the best shot at reproduction, the researchers said.

The study was published online today (May 6) in The Journal of Experimental Biology.