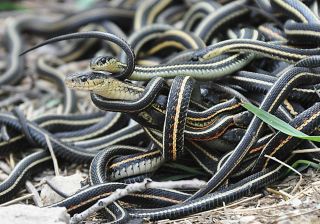 Male garter snakes form a mating ball in which each tries to get the female to open her cloaca so that he can insert his penis and mate with her.
(Image: © Oregon State University)

With their sinuous bodies, sharp fangs and, sometimes, potent venom, snakes have long struck fear into the hearts of humans and our primate ancestors. But when it comes to mating, do these ancient reptiles also have a softer side?

More than 3,000 species of snakes exist today, living on all continents except Antarctica, as well as many islands across the globe. Though snakes garner much media and research attention, the reproductive strategies of many species are still shrouded in mystery.

"There is a whole lot that we don't know about snake mating systems," said snake researcher Andrew Durso of Utah State University.

Unlike most other snakes, the mating behaviors of garter snakes have been extensively studied. Female garter snakes will emerge from their winter hibernation — technically called "brumation," a hibernation-like state that cold-blooded animals go through during chilly months — a few days after males do. When males catch the pheromone scent of a female, they will swarm over her, forming a "mating ball."

Within the snake mass, each male will try his best to get the female to open her cloaca (waste and reproductive orifice) so that he can insert his penis and mate with her. Sometimes, males will resort to force by suffocating the female and inducing a stress response in which she opens her cloaca to release feces and musk — giving sneaky males an opportunity to mate.

Other snakes, such as the green anaconda, also mate via a mating ball, and this mating strategy "might be typical for snakes that live in very temperate areas, where there is a short warm season," Durso told Live Science. "But that's the vast minority of snakes."

Many snakes are known to take a more one-on-one approach. When a male locks onto the pheromone scent of a female receptive to mating, he will follow it until he finds her. If there is already another male in the area, the males may engage in non-violent combat.

Rat snakes and vipers, for instance, will begin by sizing each other up, facing eye-to-eye as they stand their bodies up in a vertical position. They will then try to subdue each other — one male will place his chin on the top of the other male's head and push down. "It's almost like arm wrestling," Durso said. The loser must find another mate.

The winner may court the female in a variety of ways. He may rub his chin all over her body to excite her, or he may vibrate his body against hers when they are parallel. "A lot of snakes will also tongue flick, which is a different motion than the normal smelling motion," Durso said. "Presumably, there is some kind of tactile stimulation going on."

Interestingly, male snakes have two penises, which emerge from their cloaca during mating. They only use one of their penises at a time, and appear to favor one more than the other, similar to the way people are left-handed or right-handed. Each penis receives sperm only from its corresponding testicle, an adaptation that allows males to mate again if they come across a second female within a short period of time (they'll mate with one female using one of their penises, and then the other female with their second penis). [The 7 Weirdest Animal Penises]

After mating, the female may store sperm for over a year, and somehow choose which male's sperm she wants to use to fertilize her eggs.

Certain species may not need males to reproduce. Female Brahminy blindsnakes, for example, seem to reproduce only asexually by creating clones of themselves — their eggs begin cell division without fertilization from male sperm.