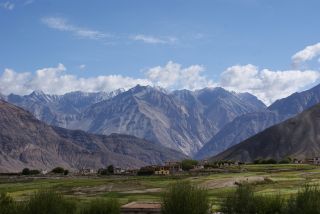 The Karakoram Range marks the former edge of Eurasia before it collided with India.
(Image: © Pierre Bouilhol)

Two super-fast conveyor belts of sinking crust explain why India set a continental speed record as it crashed into Eurasia, according to a new study.

The Indian Plate slammed into Eurasia 40 million years ago, raising the Himalayas and Mount Everest, the study's researchers explained. The new analysis suggests India raced toward the collision starting 80 million years ago because of two short subduction zones, one in front of the other, that emerged between the tectonic plates. The findings were published today (May 4) in the journal Nature Geoscience.

"The collision scenario between India and Eurasia is more complex and protracted than most people think," said the study's lead author, Oliver Jagoutz, a geologist at the Massachusetts Institute of Technology in Cambridge, Massachusetts.

A subduction zone is where a collision occurs between two of the enormous tectonic plates that are slowly shifting over the Earth's surface. Typically, a dense plate of oceanic crust gently bends and sinks beneath a more buoyant continental plate at a subduction zone, in a conveyor-belt fashion. These crash zones line the Pacific Ring of Fire, which is marked by belching volcanoes and big earthquakes. [Infographic: Tallest Mountain to Deepest Ocean Trench]

To explain the double subduction zone, first go back to the time of the dinosaurs, about 90 million years ago. A now-vanished oceanic plate (the Kshiroda Plate) divided India and Africa from Europe and Asia. There were subduction zones on the northern and southern edge of this oceanic plate, each more than 6,000 miles (10,000 kilometers) long, Jagoutz said. The ancient boundary was sucking India away from Africa at an unremarkable pace of 1.6 inches (4 centimeters) per year, Jagoutz said.

Jagoutz and his colleagues think a rejiggering of the two massive subduction systems revved up India's northward journey. About 80 million years ago, India started racing northward at 5.9 inches (15 cm) per year, according to geologic evidence. At the same, collisions at either end of both subduction zones clipped their length, the researchers reported. Each of the borders shrank to about 1,800 miles (3,000 km) long, Jagoutz said. (Arabia hit a subduction zone in the west, shutting it down, and a volcanic island chain plugged up subduction in the east.)

"That really made it so these two subduction zones can work together," Jagoutz told Live Science.

But it's not as simple as the two shorter plate margins acting like faster conveyor belts. Instead, through modeling the Earth's behavior, the researchers have shown that India sped up because the mantle moved out of the way faster at these shorter subduction zones.

The mantle is the hotter layer under the crust, where warm rocks ooze like melted plastic. At subduction zones, the gooey mantle is similar to a "speed bump" for sinking oceanic crust. If the plate borders are long, it's hard to force the mantle out of the way. But cutting the subduction zones short allowed mantle material to escape more easily to the east and west, Jagoutz showed. This meant the oceanic crust could slide down more quickly.

The difference is like trying to drink a thick shake from a long, narrow straw versus a short, wide straw.

"More force is required to move a fluid down a long and narrow pipe than to move fluid down a short and wide pipe," Magali Billen, a geophysicist at the University of California, Davis, who was not involved in the study, explained in a commentary also published today in Nature Geoscience. "Narrowing of the two subduction zones can solve two outstanding puzzles of the India-Asia collision: what caused the Indian Plate to accelerate northwards prior to collision, and why the plate moved so rapidly for so long."