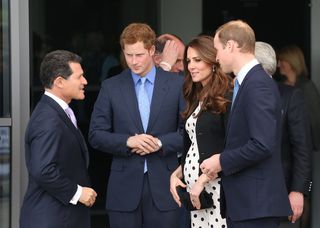 Kate Middleton and Prince William's royal baby may be the most famous baby in the world.
(Image: © FeatureFlash | Shutterstock.com)

Looks like Prince George has a new sibling with a suitably impressive moniker: Charlotte Elizabeth Diana.

The wee royal, now fourth in line to the throne, will be known as Her Royal Highness Princess Charlotte of Cambridge.

The name isn't totally unexpected, but it is a great choice, said one baby-name expert.

"This is a name of perfect balance," said Laura Wattenberg, founder of babynamewizard.com.

Not only is the name both classic and relatable, but it is also a very diplomatic choice that honors several members of the extended royal family, Wattenberg said. [Sophia's Secret: The 10 Most Popular Baby Names]

Royals don't have as much leeway in naming as commoners do. After all, the name is not just a personal preference, but also creates a brand for the entire monarchy.

"This name has to stand for the throne and connect to tradition, and reassure the public that the throne is in good hands," Wattenberg said.

Given those constraints, Charlotte is a great pick, because it is classic, simple and relatable. And just like the name choice for big brother, George, a few years ago, it wasn't a great surprise: Charlotte was one of the likeliest names before the birth of the baby, with London bookmakers ranking it, along with the names Alice and Alexandra, as one of the most likely picks for the new royal baby, Wattenberg said.

While the name Charlotte isn't sprinkled throughout the royal family line like Elizabeth and Henry are, there is enough royal precedent to make the name an appropriate pick, Wattenberg said.

"There was a Charlotte of Prussia who was descended from the Hanover line," Wattenberg said.

At the same time, Charlotte is a very simple name, and one that is very popular across the English-speaking world. In the Britain, Charlotte is one of the top 20 names given to baby girls, Wattenberg said.

But the name also reveals a concern that many parents are familiar with — "navigating the twisty waters of your extended family," Wattenberg said.

There's no telling whether little Charlotte will be the family's peacemaker, but her name is certainly trying to please multiple members of the royal family. The name honors father Charles, although in the past the name Caroline might have been a more common way to do so, Wattenberg said. (Both Caroline and Charlotte are derivations of the name Charles.)

"It honors grandpa Charles, but then you stick in the two much more loaded names, Elizabeth and Diana as middle names," Wattenberg said.

The name is a great choice from both a diplomatic and symbolic standpoint, Wattenberg said.

"You've navigated the divorced parents, the family matriarch without saddling your child with a name that has a lot of expectations attached," Wattenberg said.

Editor's Note: This story was updated to correct the year of Princess Diana's death. She died in 1997, not 1996.