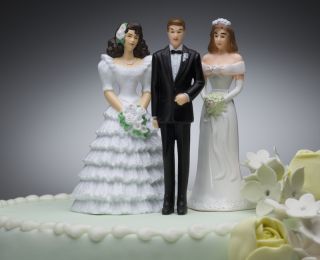 Having more than one wife may cause some serious heartache.

Men who are polygamous face more than quadruple the risk of having blocked heart vessels, compared with men married to one woman, new research suggests.

"We found an association between an increasing number of wives and the severity and number of coronary blockages," study co-author Dr. Amin Daoulah, a cardiologist at the King Faisal Specialist Hospital and Research Centre in Jeddah, Saudi Arabia, said in a statement. This link could be due to the burden of maintaining several households, which can be costly both financially and emotionally, Daoulah said.

According to the Koran, men in polygamous marriages must treat each household fairly and equally. "It seems likely that the stress of doing that for several spouses and possibly several families of children is considerable," Daoulah said.

In the study, the more wives a man had, the greater his risk of heart disease, according to the findings presented today (April 29) at the Asian Pacific Society of Cardiology Congress 2015. [Life's Extremes: Monogamy vs. Polygamy]

However, the study does not prove a cause-and-effect relationship between polygamy and heart woes. It's possible that other, hidden factors, such as the level of intimacy in a marriage, eating habits or genetic factors, could play a role in polygamy and heart disease risk, Daoulah said.

A study published earlier this year in the journal Biology Letters suggests that men and women both fall on a continuum from monogamous to promiscuous, with slightly less than half of men, and slightly more than half of women, preferring to have only one serious partner at a time.

However, some scientists have argued that polygamy makes evolutionary sense for men, but not women. That's because polygamous men can have many more children than monogamous men during a given period, whereas women can have only one child every nine months, no matter how many partners they have during that span.

However, the children of monogamous couples don't have to share the father's time and resources with the children of other women. And studies show that wives of polygamous men tend to have fewer children on average than wives with monogamous husbands.

Moreover, polygamy may not be such a great deal for men, or society, either. Adding more people to the marital equation increases the potential for interpersonal conflict and requires more resources. A 2012 study in the journal Philosophical Transactions of the Royal Society B found that across time, societies that permit polygamy have higher rates of violence, poverty and gender inequality.

To understand how the dynamics of polygamy may affect men's health, Daoulah and colleagues looked at men in the Middle East, where polygamy is more culturally accepted. In Islam, men are allowed to marry up to four different women, as long as they can support all of them and treat each wife and her children equally. (Each wife typically lives in a separate household in Islam.)

Daoulah's team followed 687 men who were referred for heart disease testing at five hospitals in Saudi Arabia and the United Arab Emirates. Among the men, 68 percent had one wife, 19 percent had two wives, 10 percent had three wives and 3 percent had four wives.

The men were 59 years old on average. More than half had high blood pressure and diabetes, and nearly half had a prior history of heart disease. Men who were polygamous tended to be older and to live in more rural areas, the researchers noted.

Dr. Michel Komajda, a past president of the European Society of Cardiology who was not involved in the new study, said that stress may play a role in the link.

People with psychological and social problems are less likely to take their heart medicine, which could also play a role in the problem, Komajda said.