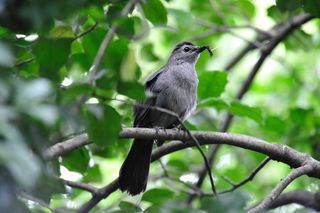 Gray catbirds sing a long song of whistles and tones with some sounding like a cat — and sometimes a frog. They love the east coast of the United States, year round, where they build nests deep inside bushes and shrubs.
(Image: © Julie Larsen Maher ©WCS)

Naomi Eide is a master's student in the Philip Merrill College of Journalism at the University of Maryland, College Park. She contributed this article to Live Science's Expert Voices: Op-Ed & Insights.

Just before dawn, birds wreak havoc on the stillness, cackling and calling to the world that spring has arrived and that it is time to mate. It's 6:32 on Easter morning, the sunrise is 14 minutes away, and the world is a hazy mosaic of muted colors, too pale to call yellow or orange.

A golden-crowned sparrow sings its three descending notes, sounding mournful in a minor key among the cheerful songs of avian neighbors. According to the Cornell Lab of Ornithology's guide, many say the golden-crowned sparrow's whistles sound like a phrase, such as "I'm so tired" or "Oh, dear me." The air is bustling with the songs of flirting birds, yet sleeping houses remain blissfully unaware that nature's instinct has taken over with the change in day length. [Stunning Songbirds Return for Spring (Photos)]

Though this late, cool spring is an exception, temperatures on average are becoming warm before their time. Climate change has disturbed the delicate choreography that synchronizes the bloom of trees and flowers with the emergence of new wildlife and native bees. In response, evolution may try to weed out some birds and native bees that do not adapt to changes.

Near the University of Maryland, on the Anacostia Tributary Trail System at Lake Artemesia, birds are ready to build their first nests, while much of nature struggles to catch up.

"Birds are being activated to sing by virtue of the sunlight right now," said Douglas Gill, professor emeritus in the biology department at the University of Maryland. "The thing that sets off most bird activity in the springtime is the change in day length," said Gill. "The change in day length is key to much of their activities … the sunlight comes in to their head, [and] it stimulates certain hormones that stimulate the rest of their bodies."

Two robins hop across the ground out of the barren underbrush, too young and naïve to know how else to court in their first season. Wild daffodils scatter in the woods, but most other greenery struggles to break through to the new season. Buds hint at the season change but refuse to erupt until the temperature is more agreeable. [6 Unexpected Effects of Climate Change]

"In this part of the world, I think it's more temperature, or for some species day length, that triggers activity and flowering," said David Inouye, an ecologist and professor emeritus at the University of Maryland who is studying the timing of wildflowers in Colorado to see the effects of climate change in high altitudes. "If you open the window or take a walk outside, you can hear flocks of geese moving around or moving north. You can hear the robins that have arrived, the cardinals [that] are singing now," Inouye said. "Those are all signs that their biological clocks are telling them it's coming on the time for reproduction in the spring."

Two small deer and four fawns freeze in their path, disturbed by any change in their natural setting. The deer blend in with the tree bark, save for the wiggle of white dotting the backside of their tails. The animals began readying for spring long before birds even thought about singing their mating songs.

By 6:50 a.m., the white tails of the deer leap high into the air, disappearing among the trees, refusing to stick around to greet visiting strangers. A cardinal flits around the underbrush, attempting to remain hidden, but its bright plumage gives it away. A river churns below, babbling with a fresh swell of rainwater to fill the banks, the only true constant in the endless change of seasons.

At 6:56 a.m., the faded colors are beginning to appear bright, a physical explanation for why some people believe in redemption and rebirth. A lone tree bursts with scarlet flowers, the sole standout among other trees making weak attempts at bloom. The moon hangs low over the tree line on the far side of a lake.

Spring is much later "because the temperatures have been a lot cooler than average. We're pretty much on the same track as we were last year, which was notoriously late," said Sam Droege, a biologist with the U.S. Geological Survey. "What that means is that the plants, which bees are associated with, are blooming a lot later."

Despite the current late spring, on average the season changes have been coming earlier than normal, and there is now some mismatch among the arrival of migratory birds, the bloom of flowers and the time when bees emerge from the ground.

In the past, migrants arrived at roughly the same time every year, Droege said. Now, migrants are arriving earlier, not just compared to 100 years ago, but to 30 years ago.

At 7:01 a.m., two Canadian geese come sweeping in for a crash landing on the still water, merrily honking to gliding neighbors below. With a splash, one goose dunks another, dipping below the surface and causing momentary chaos. The large birds will soon leave the area to return north to mate.

A metro train crashes by just as a runner emerges on the far side of the lake. Her white shoes flash across the water, progressing much more quickly than most people move on an early Sunday morning. The bright white of the new sun blends with the orange horizon beneath it, and the warmth gently touches the naked trees. The grass is just dewy enough to make it slick, and narcissus, the daffodils, vainly revel in their favored conditions, completing their bloom before other plants even have a chance to start.

It is 7:13 a.m., and the sky is now a bright blue with a handful of white clouds streaking the air. The runner makes it around the lake, disappearing back onto her original path just as two walkers and a puppy trot by.

The silhouettes of six birds sing to one another high in a tree, cast in shadow by the emerging sun and without a single leaf or flower to disguise them. Below, four little nameless birds share a branch, just birds on a wire. Another little bird's quick departure leaves only a shaking branch behind.

At 7:22 a.m., underneath a willow tree attempting to sprout, two beavers wrestle, sending ripples through the water as they dip below. After three minutes, they finally surface and separate as if in a bitter quarrel, their pancaked tails slicing the water as they give each other the cold shoulder.

Because of the lack of data, Droege's research cannot definitively say whether or not native bees are declining. There are methods to quantify native bees, but he lacks the resources to do it. There is some indication that the native bees are not adjusting to the new spring cycle well and are suffering from habitat loss, Droege said. Their difficulty, in turn, will affect people, he said.

"If all the bees and all the insects that pollinated disappeared, you'd have massive chaos in the natural world and to some extent our agricultural system, because we still depend on bugs to help us out," Droege said. "We still need bugs, these things we just crush without thinking, to keep us alive."

"People don't like bugs in their garden, so our world of suburbia is full of chemicals, which are killing bugs," Gill said. "And often, these chemicals are bad chemicals, and they get into the birds that eat them and kill the birds."

At 7:29 a.m., it is almost a full hour since the sun began to rise. Nothing is dull anymore, and the sun is fully in the sky. Everything is bright. Nothing seems monotonous. While most trees are biding their time waiting for the perfect conditions to bloom, some appear flush with color, assisted by the illusion of the sun's full light.

Leaving the woods, a hair dryer hustles in a house, while outside bluebirds flit and flap in a tree. Fat robins dig deep with their plump mates for worms. Long before people are ready to get up on a weekend morning, most birds have had their breakfast and a midmorning snack.

This year, much of the greenery delayed its official declaration of spring due to the cooler temperatures — and no one can yet predict how all of these preparations will shift with a changing climate — but at least on this morning, the birds were ready on time.