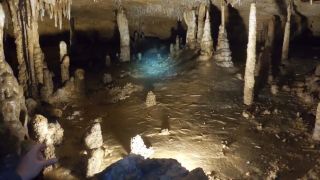 A cave in Indiana where scientists sampled for a study on ancient earthquakes.
(Image: © Sam Panno)

PASADENA, Calif. — Shattered cave formations in the central United States may preserve one of the longest records of powerful earthquakes in this region.

Historical records from European settlers provide vivid accounts of deadly earthquakes in states such as Missouri, Tennessee and Illinois. For instance, in 1811 and 1812, people saw the ground ripple like ocean waves when the New Madrid Fault Zone unleashed earthquakes thought to be greater than magnitude 8.

However, no written accounts exist from before Europeans arrived. And most earthquake faults in the Midwest are hidden deep beneath the surface, so scientists can't dig into the earth and date rocks disturbed by earlier shaking. Without a good tally of past temblors, it's hard to say when future quakes will strike.

Geologist John Tinsley says smashed cave formations could provide a new way to fill in the seismic gap. Strong earthquakes in the central United States disturbed many caves at the same time, Tinsley said yesterday (April 21) here at the annual meeting of the Seismological Society of America. [Photos: The World's 7 Longest Caves]

"Caves have long been used as time traps of one sort or another," Tinsley told Live Science. From the oldest human art to Neanderthal fossils, caves can protect and preserve delicate remains for millions of years.

Thousands of caves riddle the subsurface near the three major fault zones that threaten the Midwest and East Coast: the New Madrid Seismic Zone, the Wabash Valley Seismic Zone and the East Tennessee Seismic Zone.

Earthquakes can crack cave formations in an instant, leaving cave floors littered with rock. Relying on tips from local cavers, for nearly a decade Tinsley has searched for caverns where all of the broken rocks fell at about the same time. The youngest minerals in the fallen rocks can yield the "kill date," said Tinsley, an emeritus research scientist with the U.S. Geological Survey in Menlo Park, California. Colleagues figured out when the broken cave formations stopped growing by measuring the ratio of two radioactive isotopes in the rocks.

The results, from nearly 50 caves in the Ozark Mountains in Missouri and Arkansas, suggest at least four major earthquakes on the New Madrid Seismic Zone have rippled through the caves, Tinsley reported at the meeting. [The 10 Biggest Earthquakes in History]

"We kind of took a long shot and it seems to be paying off," he said.

Early results from caves in southern Indiana, near the Wabash Valley Seismic Zone, and in Tennessee, in the East Tennessee Seismic Zone, suggest earthquakes are fewer and far between in these regions. The damaged cave growths hint at strong quakes hitting every 6,000 years, Tinsley said.

Tinsley noted that the cave evidence is only a circumstantial argument for ancient earthquakes. That's because floods and erosion can also collapse many cave rocks at the same time. Even a blundering bat can knock down the delicate soda straws, he said. Humans have also altered caves in the central and eastern United States for thousands of years.

The strong match between Tinsley's results and earlier geologic studies strengthens the case for earthquake spelunking.

"I'm enthusiastic because they are able to ground-truth it," said Will Levandowski, a research geophysicist with the USGS in Golden, Colorado. "It's not a replacement for paleoseismology on these faults, but it's a great tool on a local to regional scale," said Levandowski, who was not involved in the research.

For instance, the cave records match evidence of older earthquakes from liquefaction studies conducted by other researchers. Big earthquakes cause liquefaction, in which sodden silt, sand and mud jiggles like gelatin from earthquake shaking. Liquefaction leaves behind distinctive patterns in these sediments, such as sand blows. Earthquakes also trigger color changes in cave growths, which researchers have matched to major earthquakes.

Tinsley said he plans to continue collecting earthquake records from caves in the central and eastern United States for as long as his knees hold out. But the next big research hurdle is to figure out where the cave-rattling quakes were located and how big they were. "We've just gotten to the point where we can prove we're seeing something," Tinsley said. "Now we want to understand how these things are getting broken."