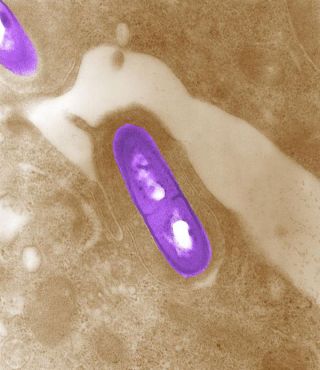 With news that Blue Bell Creameries is recalling all of its products because they may be tainted with Listeria bacteria, many are wondering exactly what Listeria is, and how it could raise questions about the food safety of a company's entire product line.

In the most recent outbreak, Listeria infections linked with Blue Bell sickened at least five people in Kansas, three of whom died. But on Monday (April 21), officials at the Centers for Disease Control and Prevention in Atlanta said the ice cream company's products were the source of other Listeria infections in Arizona, Oklahoma and Texas dating back to at least 2010.

But just what is Listeria, and how did it get into frozen ice cream? We asked an expert to explain what the bacterium is, how it grows, and what consumers can do to protect themselves from listeriosis, which is the disease caused by Listeria. [5 Scariest Disease Outbreaks of the Past Century]

Listeria monocytogenes is a type of bacteria that can be carried by food and has come into the spotlight in recent decades, said Benjamin Chapman, a food safety expert at North Carolina State University in Raleigh. Listeriosis can hospitalize most of the people infected and in recent outbreaks, about 30 percent of the people who fell ill died, he said. People infected with Listeria can take between three and 70 days to show symptoms.

People who are infected with Listeria typically have symptoms similar to other food-borne illnesses such as fever, vomiting and diarrhea. However, Listeria infections can also cause weakness, a stiff neck and confusion, according to foodsafety.gov. If caught early, Listeria can be treated successfully with antibiotics.

2. Who is at risk of infection?

Although anyone can get listeriosis, the people who are most susceptible are pregnant women, the elderly and those with compromised immune systems. Pregnant women are especially at risk: They are 20 times more likely to get listeriosis than people in the general population, according to foodsafety.gov. Pregnant women may have mild, flulike symptoms, but the disease can cause miscarriage and stillbirth, according to foodsafety.gov.

3. Is it easy to get Listeriosis?

Listeriosis can be deadly, but it isn't particularly infectious.

"It takes, for the most part, lots and lots of cells — in the tens of thousands, or hundreds of thousands of cells — per serving of food on average to make somebody sick," Chapman told Live Science.

By contrast, it takes just tens of cells of the bacteria E.coli 0157:H7 to sicken someone, he said.

Unlike most other pathogens, Listeria can continue to grow at refrigerator temperatures, and can even survive in a freezer, Chapman said. That's why frozen ice cream can still harbor the pathogen, Chapman said. In that respect "It's kind of unique in our world of food safety."

5. How could Blue Bell ice cream products have harbored Listeria for years without anyone knowing it? Wouldn't more people have gotten sick?

Listeria bacteria may hide in certain environmental niches, such as inside a drain, on a certain portion of a food-processing machine, or even inside damp, moist walls, Chapman said. At those points, the bacteria may not be coming into contact with food products. But some sporadic change in processing methods — such as doing maintenance on a piece of equipment, or taking out a machine that is only used occasionally — can dislodge some of the bacteria, exposing the food to the bacteria.

Because it takes so many Listeria cells to make people sick, exposing the bacterial source doesn't always lead to infection. This could be one reason why it took so long to tie earlier cases of the disease to the Blue Bell plant, Chapman said.

But the Blue Bell recall also underscores the importance of identifying the root cause of the outbreak, because new infections could occur until the source is eradicated, Chapman said.

Scientists still don't fully understand exactly why outbreaks of food-borne pathogens happen when they do. For instance, Listeria is commonly found in the soil, but most fruits and vegetables aren't tainted by it, Chapman said.

6. Which foods are the riskiest?

Historically, Listeria was linked with foods such as raw milk and deli meats. After a series of high-profile outbreaks in the 1980s, however, deli meat processing plants altered their practices, such as how they sanitized slicers and other processing equipment. Deli meats are now treated with lactic acid, which slightly alters the pH of the meat, making it an inhospitable climate for Listeria to grow, Chapman said.

But as epidemiologists get better at identifying people with listeriosis and treating them, the picture gets murkier. In recent years, Listeria has been tied to a seemingly random assortment of foods. A 2011 outbreak that sickened 147 was tied to cantaloupe, according to the CDC. And in late 2014, prepackaged caramel apples sickened 35 people with listeriosis, 34 of whom had to be hospitalized, according to the CDC.

7. How can I protect myself?

To protect against Listeria, people should reheat prepared foods such as hot dogs and deli meats. The refrigerator should be kept below 40 degrees F (4 degrees C), because Listeria grows even faster at slightly warmer refrigeration temperatures. Regularly wiping down the fridge with a mild detergent can also prevent a festering Listeria population from growing there as well, according to the Food and Drug Administration.

Leftovers should be tossed if they've been sitting out at room temperature for more than 2 hours, or after a few days in the fridge, because a prolonged stay in the fridge gives Listeria a chance to grow, according to the FDA.

But other than that, there's not much people can do to ensure the safety of food that comes directly from manufacturers, Chapman said.

"I'm not going to cook my ice cream, I just have trust that that ready-to-eat food was handled really well before coming to me," Chapman said.

Editor's Note: This story was updated to note that Listeria can survive at freezer temperatures, but does not grow at those temperatures.