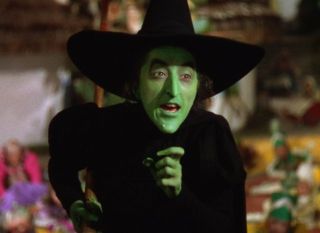 The Wicked Witch of the West can thank facial evolution for her iconic, pointy chin, new research suggests. And so can everyone else.

Compared with other human relatives such as Neanderthals, modern Homo sapiens have particularly prominent chins. Some researchers have hypothesized that the modern human chin helps the jaw stand up to the forces generated by chewing, said Nathan Holton, an anthropologist at the University of Iowa.

In a new study, Holton and his colleagues find that the chewing theory doesn't hold water.

"The development of the chin doesn't seem to have anything to do with resistance to bending stresses," Holton told Live Science. "They're just not related." [The 10 Biggest Mysteries of the First Humans]

Instead, he said, the prominence of the chin may simply be a side effect of the rest of the face evolving to be smaller.

To determine whether chin prominence protects the jaw from bending while chewing, Holton and his colleagues examined X-ray images from the Iowa Facial Growth Study, which tracked children's skull development from age 3 into adulthood. Using 292 measurements from 18 females and 19 males, the researchers tracked jaw development and bone distribution associated with protecting against various types of stresses.

Chins become more prominent with age, but the scientists found no consistent links between chin prominence and resistance. In fact, jaws are relatively better at resisting some types of forces at age 3, when chins are not well developed, compared to adulthood, Holton said.

The findings appeared online April 11 in the Journal of Anatomy.

If chins don't confer jaw protection, the reason for the pointy human chin is something of a mystery, Holton said. Overall, the Homo genus (which includes humans, Neanderthals and other ancestors) has experienced an evolution toward smaller faces over time, with Homo sapiens showing the greatest reductions in size. Among features on the modern human's face, the lower jaw stops growing last, making it relatively more prominent compared with the rest of the face.

The prominent chin "is a secondary consequence of faces getting smaller," Holton said.

So why have faces shrunk? One possibility is that hormonal changes associated with reduced violence and increased cooperation had the side effect of "domesticating" the human face, thus shrinking it, Holton said. He and his colleagues are also exploring evidence that points to the nose as the culprit. As overall body size shrank, Holton said, the nasal cavities did not need to grow as large to provide enough air for survival. The face then did not have to grow as large to support the nose.

"It really seems like a lot of changes in the modern human face are really due to a reduction in size, so if we can explain that, we can explain a lot," Holton said.