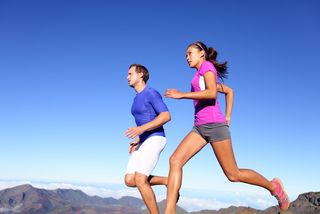 Doing a few hours of exercise every week will probably help you live longer, but doing a whole lot more exercise doesn't provide much extra benefit, according to a new study on physical activity and longevity.

Still, doing as much as 10 times the recommended amount of exercise was not linked with an increased risk of dying during the study period. That's good news for marathon runners and triathletes who may have been concerned about the long-term health effects of such high levels of activity.

In the study, researchers analyzed information from more than 660,000 people ages 21 to 98 in the United States and Sweden who answered questions about how much time they spent doing physical activity, including walking, running, swimming and bicycling. (These questions were asked as part of earlier research conducted in the 1990s and 2000s.)

People who engaged in the recommended level of physical activity saw even more benefit: They were 31 percent less likely to die during the study period, compared with those who did not engage in any physical activity.  [7 Common Exercise Errors and How to Fix Them]

But doing a lot more activity than that did not provide much added benefit. The maximum benefit was seen among people who engaged in three to five times the recommended levels of physical activity; they were 39 percent less likely to die over the study period than people who did no exercise. Engaging in more exercise than this was not linked with any additional benefit.

Although some earlier studies suggested that people who practice extreme endurance training have an increased risk of heart problems, the new study found no link between very high levels of physical activity (10 or more times the recommended level) and an increased risk of death.

"These findings are informative for individuals at both ends of the physical activity spectrum: They provide important evidence to inactive individuals by showing that modest amounts of activity provide substantial benefit for postponing mortality while reassuring very active individuals of no exercise-associated increase in mortality risk," the researchers, from the National Cancer Institute, wrote in the April 6 issue of the journal JAMA Internal Medicine.

In an editorial accompanying the study, Todd Manini, of the University of Florida's Department of Aging and Geriatric Research, pointed out that the people most likely to benefit from increasing the amount of exercise they do are those who do not currently do any.

Doctors should target this group with exercise counseling, Manini said. "Physicians who seek out the segment of the population that performs no leisure-time physical activity could receive the most payback in their patient's health."

"Our research indicates that even small amounts of vigorous activity could help reduce your risk of early death," study researcher Klaus Gebel, of James Cook University's Centre for Chronic Disease Prevention in Australia, said in a statement.

But people with medical conditions, older adults or those who have not previously engaged in vigorous activity should speak with their doctors before beginning an exercise program, Gebel said.