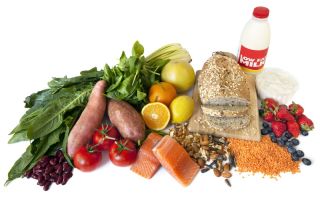 Dr. Melissa Li is a pathologist who specializes in gastrointestinal and autopsy pathology at Providence St. Vincent Medical Center in Portland, Ore. She contributed this article to Live Science's Expert Voices: Op-Ed & Insights.

In mid-February, a committee of top U.S. government scientists and nutritionists presented recommendations for the latest U.S. Dietary Guidelines. They concluded that a diet "higher in plant-based foods … and lower in animal-based foods is more health-promoting and is associated with lesser environmental impact."

While those findings aren't news to many working in medicine and nutrition, the report represents a shift in what the government may recommend to the American public in the soon-to-be revised U.S. Dietary Guidelines. And that's a good thing.

There is no controversy: Diet and health are linked

As a pathologist, I see disease daily in biopsies, resections and autopsies. When patients provide me with medical histories, it saddens me to see a litany of illnesses — heart disease , cancer, diabetes, obesity and stroke — that are largely preventable through diet. Simply reducing the amount of meat, eggs and dairy we eat has a profound effect on health, yet, instead, patients take a laundry list of drugs to battle their chronic diseases. As a nation, we pour billions of dollars into treating the symptoms of disease and far less into preventing them.

Eating more plant-based meals and less meat has helped prevent and reverse heart disease, and reduce the risk of diabetes, some cancers and obesity. Those findings were supported just weeks ago, at a meeting of the American Heart Association,, when researchers released results from the European Prospective Investigation into Cancer and Nutrition (EPIC) study, which started in 1992. The lead researcher, Camille Lassale of Imperial College London, concluded, "A pro-vegetarian diet that emphasizes a higher proportion of plant-based foods compared to animal-based foods may help lower the risks of dying from heart disease and stroke by up to 20 percent."

Recommending a more plant-based diet is something that the government has shied away from. This is partly because the U.S. Department of Agriculture (USDA), which co-authors the guidelines with the U.S. Department of Health and Human Services (HHS), is responsible for managing and promoting agriculture, including animal agriculture. To put it more simply, the USDA is tasked with promoting animal-based products like meat, dairy, and eggs. So while the agency knows what is in the best interest of Americans (eating more plant-based foods), it is torn between giving sound advice (eating more of said plant-based meals and less meat) and protecting one of the largest industries it is tasked to represent.

The benefits of a more plant-based diet are far-reaching, and not just for impacting public health. Such diets lead to fewer animals bred and confined on factory farms, as well as a lighter footprint on the environment, with subsequently decreased greenhouse gas emissions. Moving to a more plant-based diet also helps conserve precious natural resources like water and oil. And it helps reduce pollution, as waste from factory farms has contributed to a number of environmental disasters.

The good news is plant-based eating is becoming more and more mainstream, with well-known public health organizations like the American Heart Association, Defeat Diabetes Foundation, Johns Hopkins School of Public Health, and hospitals — like the one where I work, Providence St. Vincent — recommending people eat a more plant-based diet.

I am seeing that physicians with whom I collaborate on autopsies are now following this advice. For example, my colleagues in neurology who treat patients with neurodegenerative disorders are advocating plant based diets to prevent Alzheimer's disease.

One way we support those recommendations at our hospital is by easing patients into eating more plant-based meals with Meatless Monday. That approach is gaining in popularity at thousands of hospitals, as well as at some of the largest school districts in the country (including in Los Angeles, Detroit and Houston), and at universities like Portland State, Oregon State University, Western Oregon University, and many more. It can be as simple as swapping out chicken nuggets with a bean burrito or a veggie burger instead of a hamburger.

As a doctor, I'm proud to work at a hospital that embraces health care, not only for treatment but also for prevention. And as a citizen, I'm cautiously optimistic that in the final guidelines, due to be released later this year, our government will come out in support of a diet that's better for our nation's health, animals and the environment. The committee of health experts' report has laid the foundation from which the USDA and HHS can easily build.

The USDA will be accepting public comments through May 8, and anyone can voice their opinion on how the 2015 version of our dietary guidelines should direct us in eating. I too will be submitting comments in support of the report's recommendations.

Heart disease is the number one killer of Americans . According to the U.S. Centers for Disease Control and Prevention (CDC), someone in America dies from cardiovascular disease every minute, the equivalent of a tragedy half the scale of 9/11 repeating itself every 24 hours, 365 days a year. It doesn't have to be this way: We can protect ourselves — and our planet and animals — by eating more plant-based meals.