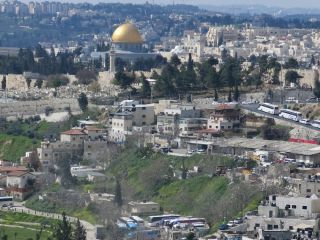 As Christians and Jews around the world prepare to celebrate the holidays of Easter and Passover, many will flock to the city of Jerusalem. Since ancient times, the city has been a magnet for religious pilgrims from some of the world's largest faiths — namely, Judaism, Christianity and Islam.

But for a small percentage of these visitors, their reverence of Jerusalem may become pathological — in other words, a visit to the city may trigger obsessive ideas, delusions or other psychotic experiences.

Some psychiatrists have dubbed this condition "Jerusalem syndrome," and say it happens in people who have no prior history of mental illness. However, others dispute the diagnosis and say the condition is more likely part of a broader psychosis, and is not unique to Jerusalem. [Top 10 Controversial Psychiatric Disorders]

"I'd never heard of it before," admitted Simon Rego, director of psychology training at Albert Einstein College of Medicine/Montefiore Medical Center in New York City. "You see things like this emerge periodically in the literature, where people think they have found a unique syndrome," but it may just be the result of an underlying mental illness, Rego told Live Science.

Jerusalem syndrome was first identified in 2000. Israeli psychiatrists reported in The British Journal of Psychiatry that they had examined 1,200 tourists who had been admitted to the city's Kfar Shaul Mental Health Center with "severe, Jerusalem-generated mental problems" between 1980 and 1993. The researchers identified three varieties of Jerusalem syndrome.

The first type included people who suffered from a previous psychotic illness, which often made them believe they were characters from the Bible. For example, one American tourist who had paranoid schizophrenia believed he was the biblical Samson, and visited Israel because he felt compelled to move one of the stone blocks in the Western Wall. (After some commotion, police intervened and took the man to the hospital.)

Patients with the second form of the syndrome may have some signs of mental disorders but not a full-blown mental illness. This category includes some people in nonmainstream Christian groups who settle in Jerusalem to wait for the reappearance of Jesus Christ. The researchers also gave the example of a healthy German man who was obsessed with finding the "true" religion, and came to Jerusalem to study Judaism, but wound up having a psychotic episode in the Church of the Holy Sepulchre (built on the site where Jesus is believed to have been crucified and buried).

Finally, the third type of patient identified in the study had no previous history of mental illness, had a psychotic episode while in Jerusalem and recovered spontaneously after leaving Israel. Only 42 of the 1,200 patients in the report fit these criteria.

However, the classification of Jerusalem syndrome has been criticized by a number of psychiatrists.

In a commentary on the study, published in the same journal, other researchers remarked that it was "regrettable" that the authors of the report did not include any epidemiological data about the condition, such as the factors that may increase a person's risk of developing it, or the factors that may protect against it or the prevalence of it.

Dr. Alan Manevitz, a clinical psychiatrist at New York City's Lenox Hill Hospital, said he thinks Jerusalem syndrome may result when a person who is at risk for psychosis undergoes the stress of traveling to another country and is immersed in a place of religious significance.

"I think what happens is, vulnerable people can be inspired by the circumstances around them," which, in Jerusalem, happens to be religion, Manevitz told Live Science.

Rego agreed that the psychotic syndrome is not unique to Jerusalem. It may be influenced by being in the city, he said, but not caused by it. "If it was purely causal, you would expect everybody who visits Jerusalem to get it," he said.

In psychology, there have been many examples of reportedly unique psychotic syndromes, Rego said. "Historical factors, including culture and context, can influence the way delusions are experienced," he said.

For example, after the film "The Truman Show" — in which the main character is a man who does not know that his whole life is the subject of a television show — came out in 1998, psychiatrists in Montreal started reporting cases of patients with "Truman Show delusion." These people thought they were the subjects of a secret reality show. And back in the 1940s, people suffered from delusions that they were somehow being controlled via radio waves.