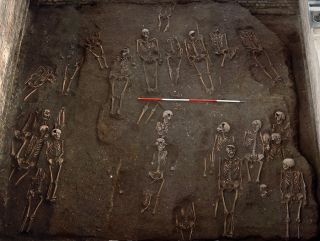 Most of the graves were aligned east-west.
(Image: © Craig Cessford, Department of Archaeology and Anthropology, University of Cambridge)

Hundreds of skeletons from a medieval graveyard have been discovered beneath Cambridge University in England.

Archaeologists got a rare chance to excavate one of the largest medieval hospital burial grounds in Britain, amid a project to restore the Old Divinity School at St. John's College (part of Cambridge University). The researchers unearthed more than 400 complete burials among evidence for more than 1,000 graves.

Most of the burials date to the period spanning the 13th to 15th centuries, according to Craig Cessford, an archaeologist at Cambridge University who led the excavation and published the results in the latest issue of the Archaeological Journal. [See Photos of the Graveyard Excavation]

The graveyard was used by the medieval Hospital of St. John the Evangelist, which was established in 1195 and closed in 1511. The Old Divinity School was built on top of the burial site in the late 19th century.

Historical sources indicate that the townspeople of Cambridge founded the hospital to care for "poor scholars or other wretched persons," while pregnant women, lepers, the wounded, cripples and the mentally ill were explicitly excluded, Cessford wrote. Those rules are reflected in the study's findings.

The relatively few young women, and the absence of infants, buried in the cemetery indeed suggests the hospital didn't care for pregnant women. Few of the skeletons bear traces of serious ailments or injuries that would have required medical attention, the researchers said. And there are no mass burials that seem to be associated with the Black Death, which peaked in Europe from 1348 to 1350, and killed at least 75 million people.

"This could reflect that the main role of the hospital was the spiritual and physical care of the poor and infirm rather than medical treatment of the sick and injured," Cessford wrote. "A few individuals, particularly those suffering from multiple conditions or with a healing wound, would have benefited from medical treatment, but these represent an extremely small minority of the burials and there is no direct evidence for treatment."

The excavators estimated that the graveyard contained about 1,300 burials, most of which were arranged in neatly laid-out rows, with each corpse in a supine position aligned in an east-west direction, without a coffin or any sentimental objects. Cessford thinks the only objects that can be described as grave goods are a copper-alloy brooch found near the torso of a female who was 27-35 years old when she died, and a crucifix pendant that was found in an adult male's grave and was made out of jet, a material that, in the Middle Ages, was believed to possess occult natural power.