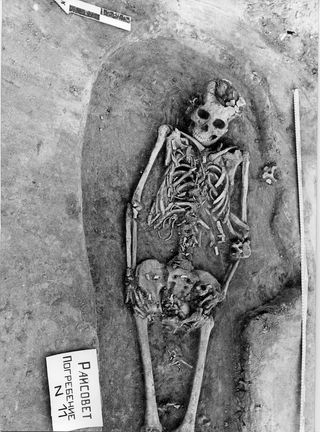 Fetal bones are clearly visible around the abdomen, pelvis and thighs of this woman, buried between 7725 and 7630 years ago, according to carbon dating.
(Image: © Vladimir Bazaliiskii)

Archaeologists say they've made a grim discovery in Siberia: the grave of a young mother and her twins, who all died during a difficult childbirth about 7,700 years ago.

The finding may be the oldest confirmed evidence of twins in history and one of the earliest examples of death during childbirth, the researchers say.

The grave was first excavated in 1997 at a prehistoric cemetery in Irkutsk, a Russian city near the southern tip of Lake Baikal, the oldest and deepest freshwater lake in the world. The cemetery has been dubbed Lokomotiv because it was exposed in the base of a hill that was being carved out during construction of the Trans-Siberian Railway in 1897. [8 Grisly Archaeological Discoveries]

Because the cemetery is partially covered by city development, it hasn't been fully excavated. All 101 of the bodies found so far at Lokomotiv were members of a hunter-gatherer community that roamed the area between 8,000 and 7,000 years ago. It's rare to find transient hunter-gatherer communities who buried their dead in formal cemeteries, but archaeologists have documented this practice at several other sites in northeastern Asia.

Angela Lieverse, an archaeologist at the University of Saskatchewan in Canada, studies these communities with the Baikal-Hokkaido Archaeology Project. In 2012, Lieverse was revisiting some of the bones found at Lokomotiv, which were in storage at Irkutsk State University. The occupants of the grave in question had initially been interpreted as a mother, 20 to 25 years old, and a single child. But when Lieverse pulled out the box of fetal remains, she said she quickly realized there were duplicates of four or five of the fragile bones.

"Within 5 minutes, I said to my colleague, 'Oh my gosh; these are twins,'" Lieverse told Live Science.

The fetal bones were all found within the mother's pelvic area and between her thighs. By analyzing the original placement of the remains, Lieverse reconstructed a traumatic childbirth scenario that even today — with modern medicine and the option of a C-section — would have been risky for the mother and her babies.

It seemed that one of the twins might have been breech (positioned with its feet down) and was partially delivered, Lieverse said. The second twin was positioned with its head down and seems to have remained in the womb. Lieverse thinks the breech baby may have been trapped or locked with its sibling, leading to a fatal obstructed birth.

"It might be a bit circumstantial, but I think it's quite strong," Lieverse said of her interpretation. She added that there has been very little postmortem shifting of the bones found at Lokomotiv, and everything is in place on the mother, even her ribs and little bones in her hands.

What makes the discovery remarkable is that cases of death during childbirth and instances of twins tend to be invisible in the archaeological record. There have been some cases of babies of a similar age buried in the same grave, but even if you had "impeccably preserved DNA," it would still be difficult to tell if these were twins and not siblings or cousins, Lieverse said.

Maternal death would have been common in prehistory. Still, it's hard to find archaeological evidence of a woman dying during childbirth — even if she died with a baby still inside of her. For instance, in ancient Rome, the law known as Lex Caesaria mandated that if a pregnant woman died, her baby had to be cut out her womb before she could be buried. Even if a woman's baby was left in the womb after she died, gas from the decomposing body might force the fetus out in what's known as a coffin birth. Fetal bones are also quite fragile and are less likely to survive than adult bones.

It's hard for archaeologists to know, based on this one burial, what this hunter-gatherer community thought of twins or death during childbirth. The young mother was buried lying on her back with several marmot teeth adorning her corpse — quite typical of the graves at Lokomotiv, Lieverse said.

"It suggests either they didn't know she had twins or that dying during childbirth wasn't so out of the realm of possibility that it would be considered unique," Lieverse said.

The finding was reported in the February issue of the journal Antiquity.