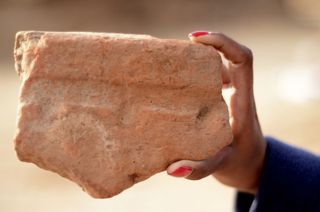 This is a fragment of a clay basin that would have been used by the ancient Egyptians to produce beer.
(Image: © Yoli Shwartz, courtesy of the Israel Antiquities Authority)

Tel Aviv's reputation as a party city for expats might have started 5,000 years ago.

During the Bronze Age, Egyptians were making beer in what is today downtown Tel Aviv, new archaeological evidence suggests.

When archaeologists were conducting salvage excavations ahead of construction on new office buildings along Hamasger Street, they found 17 ancient pits that were used to store produce, according to an announcement from the Israel Antiquities Authority (IAA).

"On the basis of previously conducted excavations in the region, we knew there is an Early Bronze Age site here, but this excavation is the first evidence we have of an Egyptian occupation in the center of Tel Aviv at that time," Diego Barkan, an archaeologist who was conducting the excavation on behalf of the IAA, said in the statement.

Barkan and his colleagues found hundreds of pottery fragments, including broken pieces of large ceramic basins traditionally used to prepare beer — a staple of the Egyptian diet.

The clay that was used to create these basins had been mixed with straw or other organic materials as strengthening agents. This method wasn't used in the local pottery industry in Israel, but straw-tempered vessels have been found before at other Egyptian sites — notably, the Egyptian administrative building that was excavated at En Besor in southern Israel, Barkan explained.

The archaeologists report that they also found 5,000-year-old bones from wild boar, sheep and goat at the site, as well as a bronze dagger and stone tools dating back 6,000 years, during the Chalcolithic period.